The International Bar Association (IBA) condemns the threat made by Fiji’s Attorney General, Aiyaz Sayed-Khaiyum, against a high level IBA-delegation scheduled to conduct an in-country review of the rule of law in Fiji . In a letter received by the IBA 24 November 2008, the Attorney-General of Fiji declared that ‘the Government of Fiji does not welcome or approve’ the delegation’s visit and would take ‘appropriate steps’ if the IBA attempts to visit Fiji . The letter was issued despite reports in the Fijian and Australian media that the Attorney General would now ‘most welcome’ a visit from the IBA.
The barred delegation included senior jurists from Australia and Malaysia who were scheduled to meet with judges and members of the legal profession for five days between 8 and 12 December 2008. The same delegation was prevented from entering the country in February of this year when the Fiji government issued an immigration stop order.

The IBA is disappointed that the Fijian Government is not supportive of independent reviews of the rule of law and independence of the judiciary. The IBA is also troubled by this latest attempt to thwart the efforts of a non-political professional association to assess the situation.

The IBA is not deterred, however, in carrying out its review. Using other avenues available, the IBA will continue its work to provide an independent assessment of the rule of law and independence of the judiciary in Fiji . A report will be issued in the near future.

The IBA regrets that the Fiji government will not meet with the delegation to present its own views on the rule of law in Fiji .

‘The Fijian Government has again indicated its lack of support for an independent review of the situation in Fiji . The threat made by the Attorney-General against the delegation is unacceptable in a free and democratic society and reflects badly on the state of affairs in Fiji ’, said Mark Ellis , IBA Executive Director.

Fernando Pombo, President of the IBA, stated: ‘The rescheduled visit had attracted the support of a variety of stakeholders including judges, lawyers and non-government organisations. It is deeply saddening to see that the Fijian Government wishes to prevent this visit from taking place in light of the manner in which it has been welcomed by the rest of the community.’
Posted by Roger Tan at Wednesday, November 26, 2008 No comments:

THE Kedah Government should have ruled by law and not by administrative policies when it introduced a housing policy of setting aside 50% of every housing development for bumiputras even though land is a state matter.

In fact, such policy is not new as the state governments of Selangor and Malacca had previously even imposed bumiputra quotas of up to 70% in some town areas. Currently, the quotas differ from one state to the other.

These policies are also being implemented haphazardly throughout the country as bumiputras from Sabah and Sarawak have complained that they have been denied discounts when purchasing properties in the peninsula.

In implementing the policy, the state governments would impose and endorse the conditions unto the land titles such as endorsing the word “bumiputra” unto the land title and this means the property can only be owned by and conveyed to a bumiputra. However, the expression “bumiputra” has not been defined either in the Code (National Land Code, 1965) or the Constitution.

In this respect, it must be emphasised that even though section 120 of the National Land Code, 1965 allows the state authority to impose express conditions and restrictions in interest upon land alienation as it deems fit, this section also clearly states that they must be done “conformable to law”.

In other words, section 120 does not give a state authority the carte blanche to impose any condition it deems fit as the supreme law which must be conformed to is Article 8 of the Federal Constitution.

Article 8 provides, inter alia, that except as expressly authorised by the Constitution, there shall be no discrimination against citizens on the ground only of religion, race, descent, place of birth or gender in matters such as the administration of any law relating to the “acquisition, holding or disposition of property”.

The other express authorisation is contained in Article 161A of the Constitution which provides that Article 89 does not apply to Sabah and Sarawak and Article 8 shall not invalidate or prohibit any state law in Sabah or Sarawak which reserves land for natives of these states or gives them preferential treatment as regards the alienation of land by the states. For this purpose, a native of Sabah and Sarawak is defined in Article 161A(6) of the Constitution.

Hence, the Kedah government must conform to Article 8 of the Constitution and not administer by way of policies.

This is especially so when our courts have consistently ruled that unwarranted use of administrative measures is no substitute for principles of good governance which enjoins all authorities to implement laws and policies guided at all times exclusively by equitable and fair principles.

Renewed resolve on places of worship 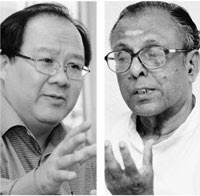 Since March 8, religious leaders have found more open doors in government offices. But, they tell YONG HUEY JIUN, they have a list of outstanding problems to address
THE Sri Maha Kaliamman Temple near Kampung Tasek Tambahan in Ampang has been demolished several times in its 19-year existence. Now it will be rebuilt for the third time -- once the Selangor government provides a new location.
Scores of non-Muslim places of worship have faced a similar fate, but with this issue swaying voters in the March 8 general election, both Barisan Nasional and Pakatan Rakyat members are speaking up for them.
In the mid-1990s, then prime minister Tun Dr Mahathir Mohamad ordered that the demolition of places of worship had to be approved by the respective menteri besar or chief minister, while he himself would decide on cases within the Federal Territory. But over the years, this directive has been ignored or forgotten.
Part of the problem is that many of these sites do not have land titles, notes Datuk A. Vaithilingam, president of the Malaysian Consultative Council of Buddhism, Christianity, Hinduism and Sikhism.
The Malaysia Hindu Sangam, the country's umbrella body for Hindus, has been working to register an estimated 7,000 temples and 10,000 shrines. So far, they have been able to register only 2,000 because many are suspicious of the exercise.
Last year, the Hindu Sangam asked the Housing and Local Government Ministry to conduct the registration instead.
In some cases, places of worship are built "illegally" on land belonging to the government or private owners. The Sri Maha Kaliamman Temple, for example, was on Selangor forest reserve land.
As far as possible, religious leaders try to negotiate new sites with local authorities or developers before the bulldozers move in. But sometimes, they only find out about demolitions when it is too late.
The demolition of the 60-year-old Sri Maha Mariamman temple in Shah Alam on Oct 30 last year, just before Deepavali, may have cost BN the local non-Muslim vote in the polls.
When the Ampang Jaya Municipal Council (MPAJ) demolished the Sri Maha Kaliamman Temple last September, both BN and Pakatan leaders protested. MIC Youth chief T. Mohan pointed out that the new Pakatan-run state government had promised not to demolish any places of worship, while Kapar member of parliament S. Manickavasagam threatened to resign as Parti Keadilan Rakyat's Selangor liaison committee deputy chairman if no action was taken against MPAJ officials.
Selangor's state committee on non-religious affairs, set up after the elections, temporarily suspended MPAJ deputy president Hamid Hussain and investigated the incident.
One of the outcomes was that owners of 27 plots of state land approved for places of worship in Selangor were told they need only pay RM1,000 quit rent for the first year and then a nominal RM1 for the remainder of new 99-year leases.
But although authorities are now more open to talks, it will take time for change to take effect.
"The government may have changed in some states," says Loka Ng Sai Kai, coordinator of the Malaysian Buddhist Solidarity Group, "but the local government officials are still the same. These officials don't necessarily understand the structural and cultural issues involved."
Bar Council's Roger Tan has been calling for a department of non-Muslim affairs to be set up in every state, stressing that religious leaders should be involved in decision-making on issues affecting their communities.
"If an illegal non-Muslim place of worship is demolished by a department of non-Muslim affairs, the impact and reaction would not be as great as it might be if the task were performed by the land office or local authority," he says.
Religious leaders complain of having faced political and bureaucratic hurdles for years.
Vaithilingam says the difficulty of establishing non-Muslim houses of worship leads to "illegal" temples and shophouses being turned into churches.
It is not uncommon for a decade to pass between application and approval of a non-Muslim house of worship. The Vihara Samadhi Temple in Shah Alam is a case in point. In the early 1990s, the Buddhist Missionary Society Malaysia (BMSM) submitted a building plan to the Shah Alam municipal council for 1.3 acres bought from the Selangor State Development Corporation.
The application was rejected -- after some five years -- on grounds that there was a large Muslim population there. BMSM was compensated with another piece of land nearby, which took the Shah Alam municipal council another three years to approve. Finally, after more than 10 years, the layout plan was approved just before the March general election.
Datuk Chee Peck Kiat, BMSM's honorary secretary-general, says impractical restrictions on building dimensions are as much to blame as the bureaucracy that stalls approval.
At a meeting with various non-Muslim representatives to discuss new guidelines for non-Muslim places of worship, Pakatan decided that such restrictions should be dealt with "on a case-to-case basis", taking into account the needs of the communities.
Another major hurdle is funding. The Federal Government has earmarked RM8 million for building non-Muslim places of worship from 2005 to 2008, with RM428 million allocated for Muslim facilities. Non-Muslim leaders say the meagre allocations compel them to rely on their own financing.
In his Budget 2009 speech last month, Selangor Menteri Besar Tan Sri Abdul Khalid Ibrahim proposed RM6 million for non-Muslim places of worship and RM103.5 million for the state Islamic Religious Department to build, maintain and upgrade religious primary schools, offices and mosques.
Religious leaders urge that places of worship not be seen as flashpoints but as nation-building blocks. Such institutions can help promote consciousness of morality and service to others, says Reverend Dr Hermen Shastri, general secretary of the Council of Churches Malaysia.
"The religious community is a vital link in this process," he says. "If people want to learn more about their own faith and offer services beyond themselves, the authorities should facilitate them."
Posted by Roger Tan at Tuesday, November 11, 2008 No comments:

Only 23 in Bar Council elections

KUALA LUMPUR: Only 23 members entered for the Bar Council elections for the 2009/2010 term at the close of nominations last Friday, fewer than the usual number from the 12,600 lawyers of the Malaysian Bar.
Two current councillors -- Roger Tan and Yasmeen Muhamad Shariff -- will not be seeking re-election.

The elections had attracted more than 30 nominees in previous years.

"I have already given my best in the last four years in serving the Bar.
"It's time to move on so that others will have an opportunity to do so," said Tan.
Posted by Roger Tan at Monday, November 03, 2008 No comments: