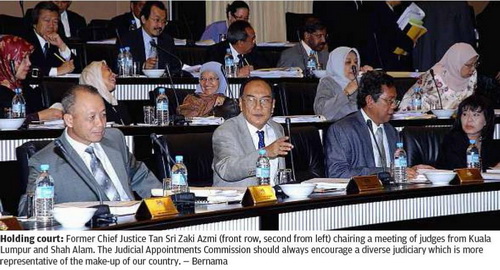 Judicial diversity and meritocracy should go hand in hand. A judiciary that does not reflect society’s diversity will ultimately lose the confidence of that society.
ENGLAND’S senior judiciary has often been described as “pale, male and stale” – that is a white, male-dominated bench.
This is understandable because despite many calls over the years for more diversity in judicial appointments, women and ethnic minorities are still sorely under-represented in the highest echelons of England’s judiciary.
Today, Lady Brenda Hale still remains the sole woman justice out of 12 places in the highest court of the United Kingdom, now known as the Supreme Court. First appointed to the House of Lords as a Lord of Appeal in Ordinary (Law Lord) on Jan 12, 2004, she was reappointed to the new Supreme Court when it replaced the House of Lords in 2009.
In October this year, Rabinder Singh became the first Sikh, a non-white, to be appointed a High Court judge of England and Wales. There is no law lord from an ethnic minority. This year two more white men, Jonathan Sumption, QC and Lord Justice Wilson, were appointed to the Supreme Court.
The President of the Supreme Court, Lord Phillips, did remark recently that he would like the Supreme Court to be 50/50 men and women from the point of perception, but he stressed that it was more important to consider judicial selections based on merit.
Lord Hope, the Deputy President, was not so hopeful, however. “It’s a great mistake to rush it forward and say that diversity must prevail over merit. The system depends on skilled people who can actually do the job and we can’t afford to have passengers here, just in the name of diversity,” he said.
But is this insistence on merit reasonable when actually it is a non-issue? Or is it simply an excuse not to effect judicial diversity speedily? If so, then perhaps the very definition of what is merit should be re-examined.
In fact, leading the call for more women and ethnic minority judges in the courts is none other than Hale herself. She said she was rather tired of being repeatedly told that change was “a matter of time”, but change never came.
Recently, Hale told the House of Lords constitution committee that “the lack of diversity on the bench is a constitutional issue”.
Read more »
Posted by Roger Tan at Sunday, November 13, 2011 No comments: