Making the case for preventive detention

by Roger Tan
In the proposed laws to replace the ISA, the government must balance, and balance it well, the state’s duty to protect national security with a citizen’s cherished liberty and human right of access to courts.
I JUST turned half a century old yesterday. But the Internal Security Act, 1960 (ISA) is older still.
In fact, the original preventive detention provision was contained in Regulation 17 of the Emergency Regulations 1948 which allowed the chief secretary to detain, by order, any person for a period not exceeding one year. Interestingly, it was made notwithstanding Section 4 of the Emergency Regulations Ordinance of 1948 which stated that the British high commissioner could make any regulations he considered desirable in the public interest provided that “no such regulation shall confer any right to punish by death, fine or imprisonment without trial…”
When the Emergency Regulations 1948 ceased after the proclamation of emergency ended on July 29, 1960, Regulation 17 was transplanted into a new statute, called the ISA which came into force on August 1, 1960.
But the ISA is not the only preventive law in Malaysia. The other two laws are the Emergency (Public Order and Prevention of Crime) Ordinance 1969 (EO) and the Dangerous Drugs (Special Preventive Measures) Act 1985 (DDA).
The EO, which came into force on May 16, 1969 after the May 13, 1969 riots, allowed the minister to detain without trial any person for up to two years in the interest of public order or in order to suppress violence or prevent crime. Currently, there are few hundreds of detainees placed under the EO.
On the other hand, the DDA, which came into force on May 30, 1985, allowed the minister to detain without trial any person involved in drug trafficking for up to two years.
The reason why these preventive laws still exist today and have not been invalidated by our courts is simply because they are permitted under Articles 149 and 150 of the Federal Constitution even though they are inconsistent with the fundamental liberties provisions stated in Articles 5, 9, 10 and 13 of the Constitution.
In this respect, Prime Minister Datuk Seri Najib Tun Razak should be commended for his bold move to repeal the ISA and the EO.
Read more »
Posted by Roger Tan at Sunday, October 02, 2011 No comments: 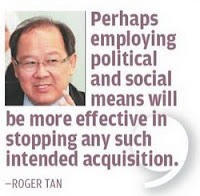 The Star
by Yip Yoke Teng
THE Land Acquisition Act 1960 and National Land Code 1965, specifically the amendment made in 1990, are two laws brought into view in the Jalan Sultan debate.
Lawyer and former member of the Bar Council Roger Tan, who is also a columnist with The Star, explained the relevance of these laws in this context.
He first highlighted an individual’s constitutional right to property as enshrined in Article 13 of the Federal Constitution. The Article reads: “No person shall be deprived of property save in accordance with law” and “No law shall provide for the compulsory acquisition or use of property without adequate compensation”.
He noted that even Singapore does not have a similar provision in its constitution.
The word ‘law’ in Article 13(1) can only mean an enacted law. This law is the Land Acquisition Act 1960 (LAA) which is in force since Oct 13, 1960.
Circumstances that allow land to be compulsorily acquired are:
Section 3(1) of LAA states that the state authority may acquire any land which is needed-
(a) For any public purpose; or
(b) By any person or corporation for any purpose which in the opinion of the state authority is beneficial to the economic development of Malaysia or any part thereof or to the public generally or any class of the public; or
(c) For the purpose of mining or for residential, agricultural, commercial or industrial purposes.

Constitution does not allow for hudud, says Bar Council

The Star
PETALING JAYA: Both the Federal Constitution and the current legislative framework do not allow for hudud to be implemented by any state, said the Bar Council.
Expressing its concern over the recent “political posturing” in reviving the possibility of implementing hudud, its president Lim Chee Wee called on all parties to instead uphold the Federal Constitution as the supreme law of the land.
“Hudud cannot be implemented within the current constitutional and legislative framework,” he said.
“The Malaysian Bar calls upon all parties to uphold the Federal Cons-titution as the supreme law of the land and cease all rhetoric on the implementation of hudud, which has inevitably caused confusion and division.
“They should focus instead on strengthening the rule of law and democratic process,” he said, adding that a Supreme Court ruling in 1988 had confirmed Malaysia as a secular state.
The Federal Constitution, he said in a statement, only allowed the states to enact laws creating offences by persons professing Islam, against the precepts of Islam, and the respective punishments for such offences.
Senior lawyer Roger Tan said the power to legislate punishment for criminal offences was with Parliament.
“To me, this is a very important issue as it is against the intention of our forefathers. If any non-Muslim does not respond strongly against PAS proposal, it is an act of acquiescence to the insidious attempt by the party to convert a secular state into a theocratic state,” he added.
Read more »
Posted by Roger Tan at Saturday, October 01, 2011 No comments: