Bar must be apolitical 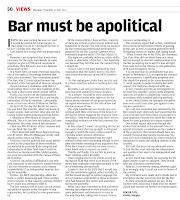 I KNEW this was coming because as I said it would be painful for some lawyers to read what I wrote in “Unswayed by fear or favour” (Sunday Star, May 20).

I am indeed not wrong with my prognostication.

However, I am surprised that it was even necessary for the eight Loyarburoks to come together to give a 2,700-word response to something they felt were just mere fallacies being spun by me.

In a tweet sent out early yesterday morning, one of the eight, K. Shanmuga tweeted that their joint statement, “Bar’s resolution proper”, (The Star, May 23) was issued because my aforesaid article had got all of them so annoyed.

Hence, because I emphatise with them, I would oblige them in the best tradition of the Bar with a short reply which should suffice.

Firstly, my concern on the independence of the 80 monitors from the Bar is not totally unfounded. Of the 80 monitors, I personally know at least one whom I follow on Twitter. 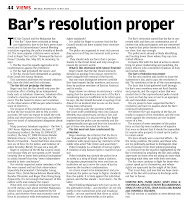 MAY 22 — The Bar Council and the Malaysian Bar (“the Bar”) have been criticised recently as being pro-opposition. This is because of the Bar’s press statements and its extraordinary general meeting resolution regarding the police brutality shown at the Bersih 3.0 sit-down rally. The common theme adopted by critics of the Bar is that the Bar was not fair, or even-handed, as the Bar were more critical of the police than it was of the other parties involved.

Some of the more popular criticisms were summarised in Roger Tan’s article “Unswayed by fear or favour” which was also published in the Sunday Star on May 20, 2012. In summary, he says the following:

1. The Bar in condemning the police brutality must be equally aggressive in its condemnation against the protestors who “behaved like rioters and anarchists”.

2. The Bar had prejudged the issues by passing the resolution because by doing so “the Bar had already come to a conclusion that all those acts listed therein had been committed by the police”.

3. The Bar should have demanded an apology from Datuk Seri Anwar Ibrahim because “it was his men who were reportedly the ones who removed the barrier” which was “the trigger point”.

This statement is written immediately in response to Roger Tan’s article, but also addresses others who have been critical of the Bar on this issue. We intend to address the second criticism first, then the third and first criticisms. Our reason for this will become apparent as our reply develops.

Unswayed by fear or favour

ON May 11, the Malaysian Bar passed a motion containing 12 resolutions related to the April 28 Bersih 3.0 public assembly by an overwhelming majority. The decision of the House with 939 votes in favour and 16 against is to be respected. The argument that it is not representative of the 14,000-member Bar has no basis whatsoever as Section 66 of the Legal Profession Act, 1976 (LPA) is clear, that is, a motion is carried if a majority votes in favour of it.

With that above overriding principle in mind, let me, however, put on record the reasons, whether rightly or wrongly, why I could not support the motion.

First and foremost, it must be acknowledged that Resolution (12) was amended to include, inter alia, that (1) the Bar is concerned by and does not countenance any acts of violence in a public rally and that such action by participants is not an appropriate response to the police; and (2) the Bar is equally concerned by reports that certain persons had crossed through the police barriers to Dataran Merdeka.

But this is a complete opposite of the language used to condemn police brutality and the manner in which the assembly was handled by the police on that day. I felt that merely expressing concern against the other law breakers is not strong enough. The Bar, in my view, must be seen in the forefront in upholding the rule of law regardless of whether they were police or protesters who had broken the law. If the Bar wanted to inveigh and condemn police brutality, the Bar must also do likewise against actions of those protesters who had behaved more like rioters and anarchists in assaulting policemen and jumping on and damaging police vehicles.

Secondly, I did not want the Bar to prejudge the issues. The way Resolution (1) was worded, it appears that the Bar had already come to a conclusion that all those acts listed therein had been committed by the police. On the other hand, Resolution (12) was worded very carefully to state that the breach of police barriers was based on reports.

As lawyers, we are trained that even if we have witnessed someone shoot another person, it does not mean the former is automatically guilty of murder. There could be other extenuating factors that require further investigation.