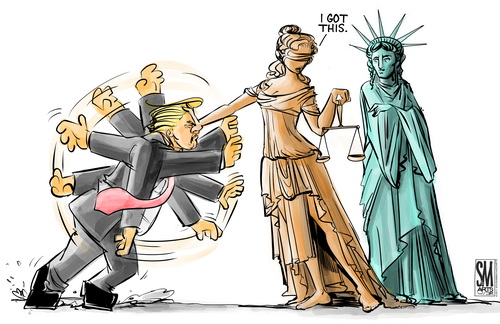 Image: I Got This by Sousa & Machado
CONGRATULATIONS to Joseph Robinette Biden Jr and Kamala Devi Harris for having been successfully inaugurated as the 46th president and vice-president of the United States respectively. It almost did not happen on Jan 20, or at all, if not for the US judiciary.
On Jan 6, the losers fomented mobs to storm the US Capitol to stop the certification of the 2020 US presidential election results. To former President Donald Trump and his acolytes, this was perhaps their last hope to get rid of what they called the “rigged result” after American courts, including the US Supreme Court, twice refused to overturn the results in battleground states. Despite five deaths, the incident could have been a calamity had any elected legislator been taken hostage or killed by the insurrectionists.
For a moment, the 245-year-old American republic almost became a banana republic devoid of the rule of law. On that day of infamy, democracy as the best form of government almost died in a country which has always prided itself on being the world’s greatest democracy.
In the words of national youth poet laureate Amanda Gorman – who wowed the world at Biden’s inauguration ceremony with her poem – “This effort very nearly succeeded. But while democracy can be periodically delayed, it can never be permanently defeated.”
The free world heaved a huge sigh of relief at this irenic victory for democracy, though this embarrassing episode has now diminished America’s moral authority as the keeper or beacon of democracy.
Before I go on, I need to pause here to say that I have not been watching too much CNN. In fact, I watch the conservative-leaning Fox News Channel too.
To the world at large, Biden did secure an emphatic victory. The world was just simply astounded to see how Trump, who was unable to accept defeat in an electoral democracy, could lie that the elections were rigged and urge his supporters to “Stop the steal”. It is even more mind boggling to see how some Americans could so easily turn cuckoo overnight, deluded by misinformation into believing in conspiracy theories.
This reminds me of the tactic employed during World War II by the Nazi minister of propaganda, Joseph Goebbels: Turn a lie into the truth just by repeating it often enough. He reportedly said: “If you tell a lie big enough and keep repeating it, people will eventually come to believe it.... It thus becomes vitally important for the state to use all of its powers to repress dissent, for the truth is the mortal enemy of the lie, and thus by extension, the truth is the greatest enemy of the state.”
Read more »
Posted by Roger Tan at Sunday, January 24, 2021 No comments:

Let us save Malaysia

The Sunday Star
by Roger Tan
Call to action: Raelyn Rachele Chwee (left) and Christina Kow of the Waste Management Association of Malaysia passing on the message to passers-by.

We need to reduce or curb the use of single-use plastic masks in order to save our environment and planet.
ANSWERING the earlier calls from the Malaysian Association of Tour and Travel Agents (MATTA) to turn to Cuti-Cuti Malaysia to help the local domestic tourism industry, my family and I decided to spend a weekend at Redang Island recently.
Interestingly, I was not alone at all in answering to this call during these febrile times. The island’s long beach was crowded with holidaymakers. We had a great stay at the Laguna Redang Island Resort. The hotel staff there were ever so helpful and courteous. They were in high spirits.
But sadly, the lives of their counterparts in the Klang Valley especially in those hotels which have remained closed since movement control order in March have been one of despondency. Some of them have to turn to part-time jobs like riders for Grab Food and Foodpanda to make ends meet.
This Covid-19 pandemic has indeed exacted an untold misery on the human race as well as the environment. But as I undertook snorkelling and enjoyed the rich underwater marine life in Redang, I felt as if God was telling us to be still for a moment and let the marine life heal and rewild itself during this period.
Then it dawned upon me how acts of men could still harm them and the environment if our oceans are still clogged with more plastic waste, posing a huge threat to the marine ecosystems. Plastic pollution will exacerbate when non-biodegradable face masks made of polypropylene (PP) and gloves made of synthetic polymers such as vinyl find their way into our rivers and oceans.
Already conservationists have found masks floating like jellyfish in the oceans and latex gloves strewn around seabeds.
Read more »
Posted by Roger Tan at Sunday, October 25, 2020 No comments: 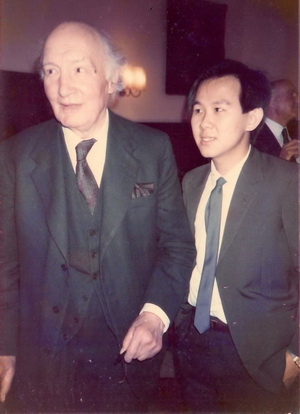 The writer with the legendary Lord Denning during his law student days in London. Denning quoted Fuller that ‘Be you ever so high, the law is above you’.

The Sunday Star
by Roger Tan
WHEN I was young, I would recite the Rukun Negara every morning during the primary school assembly.
When I was older, I would lead in the taking of this pledge as the head prefect of the secondary school every other week. This pledge-taking commenced in late 1970, a year after the May 13, 1969, incident. So this year is the golden jubilee of the Rukun Negara.
Raising our right hands, we would say these words aloud in Bahasa Malaysia:
“We, the citizens of Malaysia, pledge to concentrate all our energy and efforts on achieving these ambitions based on the following principles: Belief in God; Loyalty to the King and Country; Supremacy of the Constitution; Rule of Law; Courtesy and Morality.
What are these ambitions? They are:
> Achieving and fostering better unity amongst the society;
> Preserving a democratic way of life; > Creating a just society where the prosperity of the country can be enjoyed together in a fair and equitable manner;
> Ensuring a liberal approach towards the rich and varied cultural traditions; and
> Building a progressive society that will make use of science and modern technology.
Of course, we would often spend most of our time memorising the five principles, overlooking the importance of the five national ambitions.
Then, we were also too young to know the significance of these principles, particularly supremacy of the Constitution and rule of law.
It was only when I began as a lawyer that I realised the true significance of these third and fourth fundamental principles.
The supremacy of the Constitution means our Parliament is not supreme, unlike the British Parliament, because our Federal Constitution is the supreme law in that even our Parliament cannot make, amend or unmake any law as it pleases. Article 4(1) of the Federal Constitution declares that the Constitution is the supreme law of the land and any law passed which is inconsistent with the Constitution shall be void.
The principle of the rule of law, in simple terms, means no one is above or immune from the law. Article 8(1) of the Federal Constitution also declares that all persons are equal before the law and entitled to equal protection of the law. As Sultan Azlan Shah once said in a case when sentencing a prince, “This equality of all in the eyes of law minimises tyranny”.
It then behoves the public prosecutor and the judiciary to ensure that this nation is governed by the rule of law and not rule the law. Hence, the Attorney General is often called the independent guardian of public interest and protector of public rights; and the judiciary, the fountain of justice and the bulwark of our liberties.
This is obviously the ideal and a grandiloquent optimism. But in practice, a lot depends on the person who sits at these institutions.
Read more »
Posted by Roger Tan at Sunday, September 06, 2020 No comments:

Is our Covid-19 Bill the panacea? 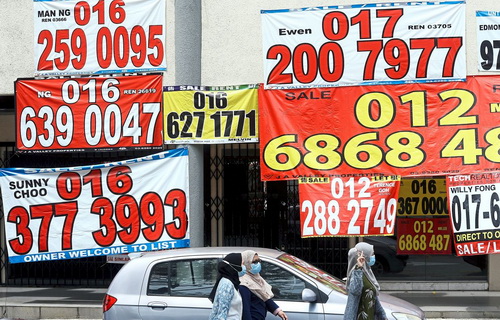 Hit hard: Covid-19 has left a wide swathe of destruction in its wake in Malaysia too. Banners of property for sale in front of a row of closed shops in Kuala Lumpur.
This Bill does not appear to be fulfilling its real purpose, which is to suspend, for a specified period, enforcement of contractual obligations against a defaulting party, who is usually the weaker party and does not have an equal bargaining strength with the other contractual party.
FINALLY. Malaysia’s much awaited version of the Covid-19 Bill (“the Bill”), entitled the Temporary Measures for Reducing the Impact of Coronavirus Disease 2019 (Covid-19) Bill was tabled for first reading in the Dewan Rakyat on Wednesday.
The Bill comprises 19 parts and 59 clauses. It seeks to modify 16 written laws. The modifications will have retrospective effect with most of the main provisions coming into effect on 18 March 2020, the day when the movement control order first came into operation. If passed, this law will prevail over any other written law in the event of any conflict or inconsistency between them.
The Bill is not expected to come into force until probably after September 2020, that is, after it has been passed by Senate; royal assent has been obtained and it is published in the Gazette. Singapore was able to pass her COVID-19 (Temporary Measures) Act, 2020, all on the same day on April 7,2020, primarily because her Parliament is unicameral.
The following are some of the statutory modifications proposed by the Bill:
> A one-time extension to 31 December 2020 is given to any limitation period which falls between 18 March 2020 to 31 August 2020 under the Limitation Act, 1953, Sabah Limitation Ordinance, Sarawak Limitation Ordinance and the Public Authorities Protection Act, 1948. The limitation period for a homebuyer to file his claim at the Tribunal for Homebuyer Claims is also extended from 4 May 2020 to 31 December 2020 if it has expired during the period from 18 March 2020 to 9 June 2020.
> The monetary threshold to take bankruptcy or insolvency proceedings against individuals is increased to RM100,000 from RM50,000 until 31 August 2021, unless further extended by the Minister.
> An owner’s right to repossess goods under a hire-purchase agreement due to non-payment of instalments during the period from 1 April 2020 to 30 September 2020 is suspended until 31 December 2020, unless further extended by the Minister. However, this does not apply to a case where the owner has already exercised his power of repossession before this law comes into force.
> Before 31 December 2020, a landlord cannot recover the arrears of rent by a warrant of distress for the period from 18 March 2020 to 31 August 2020 unless the warrant has already been executed before coming into force of this law.
> The calculation of the period for according recognition of a trade union or otherwise making of a report or filing of representation on dismissal under the Industrial Relations Act, 1967 shall exclude the period from 18 March 2020 to 9 June 2020.
However, I am more concerned with two main parts: Part 2 which deals with inability by parties in performing contractual obligations and Part 11 which deals with modifications to the Housing Development (Control and Licensing Act, 1966 (Act 118).
Read more »
Posted by Roger Tan at Sunday, August 16, 2020 No comments: