Is our Covid-19 Bill the panacea?

Hit hard: Covid-19 has left a wide swathe of destruction in its wake in Malaysia too. Banners of property for sale in front of a row of closed shops in Kuala Lumpur.
This Bill does not appear to be fulfilling its real purpose, which is to suspend, for a specified period, enforcement of contractual obligations against a defaulting party, who is usually the weaker party and does not have an equal bargaining strength with the other contractual party.
FINALLY. Malaysia’s much awaited version of the Covid-19 Bill (“the Bill”), entitled the Temporary Measures for Reducing the Impact of Coronavirus Disease 2019 (Covid-19) Bill was tabled for first reading in the Dewan Rakyat on Wednesday.
The Bill comprises 19 parts and 59 clauses. It seeks to modify 16 written laws. The modifications will have retrospective effect with most of the main provisions coming into effect on 18 March 2020, the day when the movement control order first came into operation. If passed, this law will prevail over any other written law in the event of any conflict or inconsistency between them.
The Bill is not expected to come into force until probably after September 2020, that is, after it has been passed by Senate; royal assent has been obtained and it is published in the Gazette. Singapore was able to pass her COVID-19 (Temporary Measures) Act, 2020, all on the same day on April 7,2020, primarily because her Parliament is unicameral.
The following are some of the statutory modifications proposed by the Bill:
> A one-time extension to 31 December 2020 is given to any limitation period which falls between 18 March 2020 to 31 August 2020 under the Limitation Act, 1953, Sabah Limitation Ordinance, Sarawak Limitation Ordinance and the Public Authorities Protection Act, 1948. The limitation period for a homebuyer to file his claim at the Tribunal for Homebuyer Claims is also extended from 4 May 2020 to 31 December 2020 if it has expired during the period from 18 March 2020 to 9 June 2020.
> The monetary threshold to take bankruptcy or insolvency proceedings against individuals is increased to RM100,000 from RM50,000 until 31 August 2021, unless further extended by the Minister.
> An owner’s right to repossess goods under a hire-purchase agreement due to non-payment of instalments during the period from 1 April 2020 to 30 September 2020 is suspended until 31 December 2020, unless further extended by the Minister. However, this does not apply to a case where the owner has already exercised his power of repossession before this law comes into force.
> Before 31 December 2020, a landlord cannot recover the arrears of rent by a warrant of distress for the period from 18 March 2020 to 31 August 2020 unless the warrant has already been executed before coming into force of this law.
> The calculation of the period for according recognition of a trade union or otherwise making of a report or filing of representation on dismissal under the Industrial Relations Act, 1967 shall exclude the period from 18 March 2020 to 9 June 2020.
However, I am more concerned with two main parts: Part 2 which deals with inability by parties in performing contractual obligations and Part 11 which deals with modifications to the Housing Development (Control and Licensing Act, 1966 (Act 118).
Read more »
Posted by Roger Tan at Sunday, August 16, 2020 No comments:

Of the Bench and the Bar 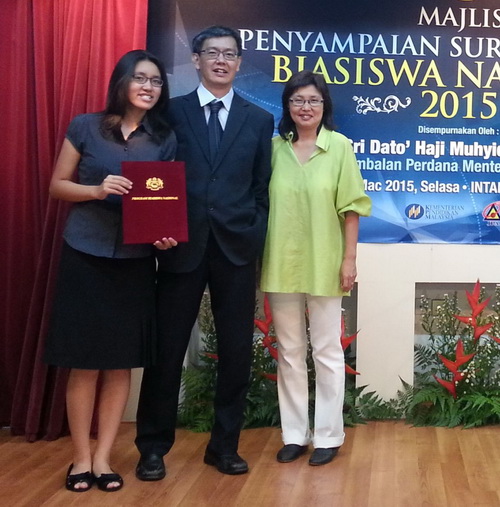 Allyna Ng with her proud parents, Datuk & Datin Ng Kong Peng at the 2015 JPA Presentation Ceremony.
Malaysia’s rule of law can only be upheld if these twin pillars remain independent and fearless. And for that to happen, we need to eradicate one of their main threats — the mass production of lawyers who are ill-equipped and incompetent due to poor legal training and education.
IT is always a proud moment for the nation whenever we learn of our young Malaysian students excelling in their legal studies overseas.
On July 21, Allyna Ng Ming Yi obtained a first class honours in BA Jurisprudence (Law) from Oxford University. She was also the recipient of the Crystal Prize for best overall performance in Law; the Farthing Prize for best performance in Constitutional Law and the Monk Prize for best performance in Criminal Law.
Allyna, the younger daughter of lawyer couple, Datuk Ng Kong Peng and Datin Amy Yeo of Melaka (pic), is a Public Services Department (JPA) scholar. An alumna from SMK Infant Jesus Convent, she was also in the top 20 of 2014 SPM candidates in Malaysia.
In fact, this is not the first time a Malaysian youngster has done our country proud with their law studies overseas. In October 2010, an ex-Muar High School boy, Tan Zhongshan emerged as the overall best law student in the entire Cambridge University – an academic feat said to have surpassed even that of the university’s luminary alumni, Singapore’s former Prime Minister, the late Lee Kuan Yew and his wife.
A son of a retired Federal Court judge and a holder of Singapore’s Asean scholarship, Zhongshan later graduated with a Master of Law degree from the prestigious Harvard Law School and is now reportedly a deputy public prosecutor in Singapore.
I always marvel at such academic achievements by others, wondering how they could have done it with such ease. I have nothing much to boast about my own academic achievement, except perhaps being in the top 15 among Commonwealth students in the 1988 English Bar Finals. I must unashamedly confess that I chose law because I was hopeless in Mathematics and Science, having failed both in my Form 5 Malaysian Certificate of Education examinations!
But it must be stressed that having a good academic result will not guarantee a successful career at the Bar in this dog-eat-dog world meant only for the survival of the fittest. Take for example, the late Karpal Singh only obtained a third-class honours law degree from the University of Singapore but he later became one of the most outstanding criminal lawyers this country has ever produced.
On a more serious note, more than 1000 law graduates enter the legal profession every year, but there is no common system to evaluate, ascertain and ensure their levels of competence. Today, there are about 21,000 lawyers practising in Peninsular Malaysia, and the number of lawyers in Klang Valley alone will exceed the total number of lawyers in Singapore.
Read more »
Posted by Roger Tan at Sunday, August 02, 2020 No comments: