No room for hudud law

IT was indeed unusual. On May 26, the Minister in the Prime Minister’s Department Datuk Seri Azalina Othman Said moved a motion allowing opposition MP, PAS president Datuk Seri Abdul Hadi Awang’s Private Member’s Bill (PMB) to take precedence over government business. This has enabled Abdul Hadi’s PMB to leapfrog over government matters, thus allowing it to be tabled. Abdul Hadi had tried twice since 2015 and failed, but now his PMB will be debated in the October parliamentary session.

Needless to say, the non-Muslim Barisan Nasional leaders felt slighted as they were obviously caught unawares.

However, the exhilarated PAS leaders had no hesitation to proclaim that it was to pave the way for the implementation of hudud punishment in Kelantan via the Syariah Criminal Code II (1993) 2015 (SCC) passed by the Kelantan State Legislature on March 19 last year.

The preamble to the SCC clearly states that this state enactment is for the creation of Syariah hudud criminal offences. Under the SCC, there are six types of hudud offences – sariqah (theft), hirabah (robbery), zina (unlawful sexual intercourse such as adultery, pre-marital sex and sodomy), qazaf (accusation of zina which cannot be proven without four witnesses), syurb (consuming liquor or intoxicating drinks), and irtadad or riddah (apostasy).

Emotion aside, let us now look at this controversial subject strictly from the legal perspective.

JOHOR BARU: The water level at the Sg Layang Dam has dropped to a critical level. The dam will only be able to supply water for between two and three weeks if the present weather persists.

So far, the authorities have not started any water rationing or scheduled water cuts for about 500,000 residents who get their supply from the dam.

The dam supplies water to those in Pasir Gudang and Johor Baru.

National Water Services Commission (SPAN) chief executive officer Datuk Mohd Ridhuan Ismail said that there was a high possibility of water cuts being implemented if the situation did not improve.

“The water level at Sungai Layang is now at 19.58m which is way below critical level of 23.5m.

“It is alarming because the level seems to be consistently dropping by about 0.03/0.04 metres per day,” he told reporters after visiting the Sungai Layang water treatment plant here. 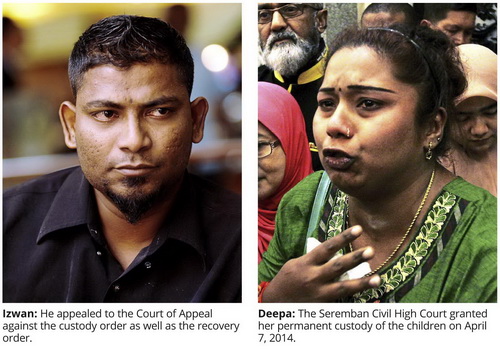 The Federal Court ruling on the custody battle between a Muslim convert and his Hindu ex-wife was a landmark decision. Can the thorny issue of unilateral conversion be finally be put to rest?

The much-awaited decision of the Federal Court involving S. Deepa and her former husband, now a Muslim convert, Izwan Abdullah, delivered on Feb 10, is sort of a landmark decision.

Deepa and Izwan (whose Hindu name is N. Viran) registered their civil marriage on March 19, 2003, under the Law Reform (Marriage and Divorce) Act, 1976 (Act 164). They have two children, a girl, V. Shamila and a boy, V. Mithran. ­Both were Hindus at the time of their birth.

On Nov 26, 2012, Viran converted to Islam. On Jan 4, 2013, Izwan unilaterally converted the two minors to Islam surreptitiously without the knowledge or consent of Deepa.

Shamila’s Muslim name is Nur Nabila Izwan while Mithran is named Muhammad Nabil Izwan. On May 15, 2013, Izwan also managed to obtain a dissolution order of his civil marriage with Deepa from the Seremban Syariah High Court under section 46(2) of the Islamic Family Law (Negri Sembilan) Enactment 2003. Then on Sept 19, 2013, Izwan was granted permanent custody of the two children by the Syariah High Court with Deepa having visitation rights and access to the children.

Meanwhile, upon the application of Deepa, the civil marriage was dissolved by the Seremban Civil High Court on April 7, 2014. The same court also granted permanent custody of the children to Deepa with Izwan having weekly access to the children. However, two days later, Izwan took Mithran away from Deepa’s house. Deepa then applied for and obtained a recovery order from the Civil High Court pursuant to section 53 of the Child Act, 2001.

On Feb 10, the Federal Court ruled that as long as one parent was non-Muslim, the Syariah Court had no jurisdiction to hear any matter pertaining to the marriage solemnised under civil law at the very beginning (ab initio). The court also granted custody of Shamila (Nurul Nabila), 11, to Deepa, while son Mithran (Nabil), eight, is to live with Izwan.

To be fair to the panel of five Federal Court judges chaired by the Court of Appeal President Tan Sri Raus Sharif who also delivered the decision of the apex court, the issue of unilateral conversion was not addressed simply because the court was asked to determine only two questions of law, namely: