No room for hudud law

IT was indeed unusual. On May 26, the Minister in the Prime Minister’s Department Datuk Seri Azalina Othman Said moved a motion allowing opposition MP, PAS president Datuk Seri Abdul Hadi Awang’s Private Member’s Bill (PMB) to take precedence over government business. This has enabled Abdul Hadi’s PMB to leapfrog over government matters, thus allowing it to be tabled. Abdul Hadi had tried twice since 2015 and failed, but now his PMB will be debated in the October parliamentary session.

Needless to say, the non-Muslim Barisan Nasional leaders felt slighted as they were obviously caught unawares.

However, the exhilarated PAS leaders had no hesitation to proclaim that it was to pave the way for the implementation of hudud punishment in Kelantan via the Syariah Criminal Code II (1993) 2015 (SCC) passed by the Kelantan State Legislature on March 19 last year.

The preamble to the SCC clearly states that this state enactment is for the creation of Syariah hudud criminal offences. Under the SCC, there are six types of hudud offences – sariqah (theft), hirabah (robbery), zina (unlawful sexual intercourse such as adultery, pre-marital sex and sodomy), qazaf (accusation of zina which cannot be proven without four witnesses), syurb (consuming liquor or intoxicating drinks), and irtadad or riddah (apostasy).

Emotion aside, let us now look at this controversial subject strictly from the legal perspective.

Firstly, under paragraph 1 of List II (State List) of the Ninth Schedule to the Federal Constitution, a state legislature can enact laws to punish Muslims who commit offences against Islamic precepts, except in regard to matters included in the Federal List. In this respect, criminal law encompassing offences such as theft, robbery, rape, murder and causing grievous hurt is expressly included in Federal List (List I) under paragraph 4.

Secondly, paragraph 1 also states the Syariah Courts “shall not have jurisdiction in respect of offences except in so far as conferred by Federal law”. Act 355 is an example of such a Federal law. It stipulates that Syariah Courts are currently only allowed to impose the so-called maximum 3-6-5 penalties – a three years’ jail or six strokes of rotan or a RM5,000 fine.

Now, Abdul Hadi has tabled his PMB to remove the above jurisdictional limit by replacing it simply with “any sentence allowed by Islamic law” other than the death sentence. Hence, sentences such as amputation or whipping of 80 or 100 lashes imposed by SCC on the relevant hudud offences will be permitted. In fact, by not stating a limit on the Syariah Courts’ jurisdiction, the proposed amendment to this Federal law of Act 355 is actually giving all West Malaysian state legislatures carte blanche to decide on the form, type and limits of punishment of offences against Islamic precepts other than imposing the death penalty.

In fact, I am still trying to understand, for example, if imprisonment is still the ultimate punishment for sariqah (theft) under SCC for third and subsequent offences, then why the need for amputation for the first and second offences? Abdul Hadi’s PMB should have also expressly excluded amputation in addition to the death penalty by whatever means, including stoning.

In fact, the PMB and SCC have failed to address this fundamental question: if any of the hudud offences such as theft and robbery are already offences under the Penal Code which is a Federal law, does a state still have the legislative competency to create such offences under state law to apply to Muslims only?

Also, under the Penal Code, the closest examples of illicit sexual intercourse with a married person are found in Sections 493 and 498. Section 493 makes it an offence against a man if any woman who cohabits or has sexual intercourse with him because he deceitfully causes her to believe that she is lawfully married to him when she is not. Section 498 provides that it is an offence, for example, for a man to entice away a married woman with intent that she may have illicit intercourse with him. However, it is not an offence for a woman to do the same with a married man! These antiquated provisions are probably aimed at protecting women who in those days when the sections were enacted were less educated and easily exploited by men.

In Latifah Mat Zin v Rosmawati Sharibun & Anor, 2007, the Chief Justice of the Federal Court, Tun Abdul Hamid Mohamad said: “So, where an offence is already in existence in, say, the Penal Code, is it open to a state legislature to create a similar offence applicable only to Muslims? Does it not fall within the exception ‘except in regard to matters included in the Federal List’ ie, criminal law? To me, the answer to the last-mentioned question is obviously in the affirmative.”

Further, Article 75 of the Federal Constitution provides that in the event of any inconsistency between state law such as the SCC and Federal law, that is, the Penal Code, the latter shall prevail, and the state law shall to the extent of such inconsistency be void. It follows that in view of the Latifah case, even if the PMB is passed, the SCC is still void.

Of course, one way to circumvent Article 75 is for Federal Parliament to confer legislative authority on the state via Article 76A of the Federal Constitution in which case the state law, for example, the SCC can amend or repeal (as regards the State in question) any Federal law passed prior to it.

That said, it still does not mean that SCC is immutable if PAS is able to get the requisite authority from the Federal Parliament under Article 76A. The reason being SCC can still be invalidated if it contravenes other provisions of the Federal Constitution such as Article 8.

Article 8 declares, inter alia, that all persons are equal before the law and entitled to equal protection of the law and except as expressly authorised by the Constitution, no citizen shall be discriminated on the ground only of religion.

Hence, if a Muslim and non-Muslim commit the same offence of theft, Article 8 will be breached if the Muslim is charged under hudud law whilst the non-Muslim is charged under the Penal Code. Similarly, a Muslim woman may not have equal protection of the law like a non-Muslim rape victim as it has often been argued that it is possible for a Muslim rape victim to end up being charged for adultery if the offender does not confess to it or there are no four male witnesses of the act.

It is therefore axiomatic that unless Article 8 is first amended to allow discrimination on the ground of religion, the SCC is obviously ultra vires of the Federal Constitution.

The next issue is can Article 8 be amended? Constitutionalists have argued that our Constitution is a secular one. Our forefathers have never intended Malaysia to be a theocratic state. Therefore, to amend Article 8 to expressly authorise the implementation of hudud law is tantamount to changing the entrenched basic structure or grundnorm of the Constitution. This is akin to the oft-quoted example of changing the frequency of general elections from once every five years to say once every 20 years!

However, Islamists have argued that Malaysia is an Islamic state because Article 3 states that Islam is the religion of the Federation of Malaysia. However, history is replete with evidence that this constitutional clause cannot be interpreted to mean Malaysia is an Islamic state. Our founding father, Tunku Abdul Rahman and the Reid Commissioners had repeatedly asserted this point.

With all due respect, I agree with our Father of Independence. In fact, our apex court has already declared in Che Omar bin Che Soh v Public Prosecutor & Anor, 1988 that Malaysia is a secular state; otherwise there would be provisions in the Constitution to state that any law which is contrary to the injunction of Islam will be void. Further, at the time of Independence, civil courts still had jurisdiction over Syariah courts whereby decisions of the Syariah courts could be set aside by civil courts. This was expressly stated in various state Islamic enactments, for example, Section 45(6) of the Selangor Administration of Muslim Law Enactment, 1952 (now repealed).

If Malaysia were an Islamic state from the very date of her inception, civil courts would not have been seised of such power! This was the position until Article 121(1A) was inserted into the Constitution on June 10, 1988 to provide otherwise. A fortiori, our apex court remains the Federal Court which comprises judges who rose from the ranks of civil court judges. And only the Federal Court has the power to invalidate any law including any state law if it goes against the supreme law of this land, that is, our Federal Constitution.

In fact, I would respectfully suggest that if at all our Constitution should be amended, it should be Article 10 to proscribe any association which is a political party to be formed solely on the ground of religion!

Today, there is just too much religious and racial polarisation in the country. The country is in such a state because on one hand, our Malay politicians try to appease their puritanical supporters. On the other hand, the non-Malay politicians are accused of political acquiescence based on their Malay colleagues’ assurance, which albeit often genuine at the time it was made, that non-Muslims’ rights would not be transgressed.

But in reality, it is not the case. Our society is now divided over issues such as the use of the term “Allah” and religious conversion of minors. Similarly, our police will not act on any conflicting order which is concurrently issued by civil and Syariah courts.

It is also erroneous to say hudud law will not affect the non-Muslims. For example, while the SCC is clear that it does not apply to a non-Muslim offender, it will become a point of contention if a Muslim offender insists on being tried by hudud law even though the victim is a non-Muslim. As if the conversion cases are not already mind-boggling, this will give rise to another set of headaches to our multi-religious and multi-racial leaders.

Similarly, if these laws are applied rigidly, there will be a clash of cultures when entertainment activities and consumption of non-halal items in certain areas are banned because they would go against the Islamic precepts. All in all, it is sad really that we have replaced the politics of moderation with politics of appeasement and acquiescence.

In fact, our government should desist from the practice arguably started since the Mahathir administration, that is, anything is permissible unless and until it is stopped by the courts. The great lawyer statesman, Tun Hussein Onn’s approach was and which is the hallmark of a good governance, is if the legality of any course of action is in doubt, it will not be proceeded with. If we had adopted this good practice, Abdul Hadi’s PMB would not have been given precedence in the first place. 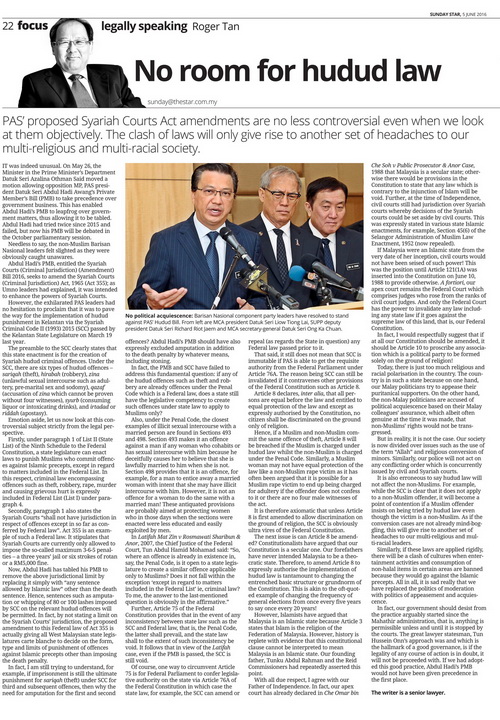