The Star
By Mazwin Nik Anis 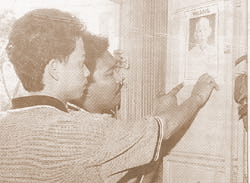 JOHOR BARU: Posters bearing his photograph are on almost every available wall but Tan’s family members have not received any news on their patriarch’s whereabouts since he left home exactly two months ago today.
Tan Sue Yong, 87, has been missing since May 23 and his family members have searched extensively for him, including putting up missing persons advertisements in all the English, Malay and Chinese dailies but to no avail.
Tan’s son, Roger, said the family members were at their wits end but have not given up hope.
“We have also put up posters in public places, obtained assistance from the police, Rela, Rukun Tetangga and every other association that we can think of, but still, my father has not been found.
“My family, especially my 76-year-old mother is extremely worried about his well-being,” he said.
Roger said his mother had refused to leave home fearing her husband would return and find the house empty, and no amount of persuasion could help change her mind.
On May 23, Tan, who suffers from dementia and Alzheimer’s disease left his home in Lorong Enam, Yong Peng for his daily walk in the afternoon but failed to return.
This is the second time Tan had gone missing.
In 1998, he took off on his old motorcycle and was found two days later in Malacca.
Tan was wearing a straw hat, a short-sleeved white shirt with stripes and a pair of brown long pants when he left home on May 23.
He was also carrying his identification papers.
Roger said the last information that they had received was that Tan was spotted boarding an express bus from Yong Peng to Johor Baru on June 13.
He said the family had also received other leads but all had ended in wild goose chases.
Posted by Roger Tan at Saturday, July 22, 2000