I USED to sing this nursery rhyme in primary school. I do not know whether this is still being sung in our schools today, but I certainly hope it is still being permitted.

But one thing is certain, if old Macdonald had a farm in Malaysia, he would not be able to keep both the pigs and the cows together.

The reason is that in a multi-religious country like ours, what we eat is an issue.

For the Muslims, the Quran as stated in Al-Baqarah 173 specifically mentions that a pig is haram and hence Muslims are forbidden from consuming pork.

So our government banned the 1995 Academy Award-winning Australian film, Babe, which tells the story of a pig which wants to be a sheepdog

To a Hindu, a cow is a sacred animal and while Hindus do not eat beef, they do drink cow's milk.

That is why Hindus protested when the Backbenchers Club, though done with good intentions, unwittingly undertook a mass slaughter of cows on the grounds of Parliament House last July.

Therefore, as we are sensitive to all religious groups, the Malaysian Bar has long stopped serving pork and beef at its functions. The same goes for shark's fin soup to appease the environmentalists.

In fact, when my parents first came over from China in 1947, they settled down in Sepang as pig farmers until they moved to Yong Peng in 1958.

In the 1960s, when I was about 5-years-old, my parents still kept a sow behind the house. So did some of our neighbours.

There was one event which I still recall with much amusement. It was that of this cheeky-looking old man bringing his boar to mate with our sow -- a paid service though!

Those days, there was no such thing as transporting the boar on a vehicle. So, the old man had to leash the boar along the street which led to the pigsty.

Of course, if this were done today, it would probably cause a riot even though pigs are still kept as domestic animals in some remote areas of Sabah and Sarawak.

A story was also narrated to me of a senior Umno leader who stayed opposite a Chinese family in the kampung when he was a boy.

During some of the Chinese festivals, the Chinese neighbour would sacrifice a pig for prayers, with the pig's head pointing towards his house. It did not matter to him and his family then as it was tolerable conduct in those days.

But times have changed. The recent demonstration by hundreds of Muslim residents against the RM100 million pig farm project in Kuala Langat, Sepang, was understandable.

I am no expert on pig farming, but from the little I know, a pig produces three times more excrement than human beings do.

Over 90 per cent of the manure is water as half of a pig's body is made up of water. Only four to five per cent of the waste is solid material. This includes nitrogen, phosphorus and other organic materials.

As these omnivorous animals are prone to heat stress, pigs have to be washed regularly to cool them down. Therefore, how we control the discharge of effluent and waste water is important.

The traditional way was to use lagoons and small ponds located behind the farm to contain it, but the effluent still managed to escape into rivers and waterways.

Before the 1970s, most of the pig farms were sited far away from human populations. Today, it has obviously become not only an environmental problem, but a social one when rapid development brings the people closer to these farms.

Further, apart from the stench emanating from the waste, it also causes noise pollution as pig squeals can reach up to 112 decibels, about the same as a Boeing 747 jet at take-off. This is harmful to human hearing.

Secondly, the pig population multiplies fairly quickly. A sow can farrow a litter of up to 13 piglets after a gestation period of only 120 days.

Piglets can be sold after two months or so to restaurants for roasted suckling pigs.

Male pigs sold for meat are known as hogs, and they are usually neutered or castrated after a few weeks. The hogs are fully grown after five months and the life span of a pig is generally 10-15 years.

According to a study conducted by the Department of Veterinary Services in 2006, there are close to 900 pig farms, with a population of about 1.8 million pigs in Malaysia. This figure is small compared with countries like Thailand, which rears about 11.5 million pigs.

In fact, this RM2 billion industry is not without controversy, apart from being hit by diseases such as Japanese Encephalitis (JE) and the Nipah virus.

Two years back, pig farmers were accused of using the banned drug, beta-agonist, in their feed so that the pigs would mature faster and have a higher amount of lean meat.

This drug can cause palpitations, headaches and even death, especially in heart patients.

I am not suggesting that pig farming must now be outlawed. Given the political and economic considerations, this industry will stay, a reality which we have to accept.

However, it is a sensitive issue which all parties must look at rationally. To argue that pig farming ought to be abolished because one section of society does not consume pork is wholly flawed as the same argument can be applied to the rearing of cows for meat when beef is not consumed by another section of society.

The sad part of it is that for too long now, pig farming has been sorely neglected. The reason is obvious because, if not handled properly, a politician will be committing political suicide. So, if it is possible, most of them prefer to stay away from it rather than pluck up the courage to deal with it.

For decades, pig farms have been scattered here and there without any efficient or centralised facilities to treat pig waste.

As demand for pork increases, the discharge of waste correspondingly increases. Also, as land status over these farms is often unsettled and temporary, pig farmers are more motivated by greed and the need to make quick profits rather than investing monies for pollution control.

Indeed, in some countries like Singapore, an environmental levy was imposed on each pig towards a fund to help farmers construct high quality waste treatment facilities.

I visited a modern pig farm in Denmark in September 2000. When I reached the farm, the place looked more like a factory to me because the pigs were virtually out of sight.

Neither was there any odour and the effluent was efficiently treated. The pigs were housed indoors in properly ventilated, temperature-regulated and sound-proofed buildings. Each pig was confined to its individual stall. The workers were required to shower and cleanse their bodies before and after entering the building to prevent the spread of any swine disease to humans.

Such modernised pig farming will be ideal for our country environmentally and socially.

In this respect, it is hoped that right-thinking Malaysians will support any move by the government to implement this concept of centralised pig farming areas (PFAs), whereby existing pig farms can be relocated to a PFA.

I believe the Kuala Langat project is one such PFA, where modern and environmentally-friendly waste treatment techniques will be employed so that no effluent will escape into the rivers and waterways. The waste can also be converted into alternative energy and fertilisers.

By confining these animals indoors and out of sight of locals, it will also avert any confrontation between pigs and people.

I am confident that with greater public awareness and education, our people and pig farmers will be better informed and accept this win-win situation, devoid of any emotion.

It follows that if, according to Selangor Menteri Besar Tan Sri Khalid Ibrahim, that the Kuala Langat project was initiated by the previous Selangor government, then the Barisan Nasional government ought be congratulated for this.

The new Selangor government too ought to be praised for having the gumption to continue with it. 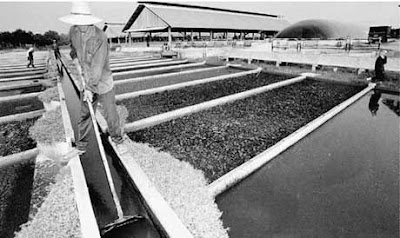 Modern pig farms, such as those in Denmark, have shown that this can be a profitable and environmentally safe industry. At a pig farm in Ratchaburi, 130km south of Bangkok, pig waste is dried in the sun to be sold as organic fertiliser. Pig waste can also be processed to provide methane gas, used for cooking and generating power.
Posted by Roger Tan at Sunday, April 13, 2008