Are we paying our judges enough?

IN 2006, a highly respected judge of the United States 4th Circuit Court of Appeals, J. Michael Luttig, resigned to join Boeing Co as its general counsel. His resignation shocked US legal circles at a time when he was something of a superstar in the judicial service who had also been shortlisted as a potential Supreme Court nominee. He was also the youngest judge (at age 37) to be appointed to a Federal Appeals Court in 1991.

In his letter to US President George W. Bush, Luttig explained: "I am convinced that this is the right decision for me at this time, and, most importantly, for my family, to whom I owe my highest obligation. This is especially so, as I am sure you can understand, given that my daughter, Morgan, is rapidly approaching college age, and my son, John, is following not long behind."

In the 2006 Year-End Report on the Federal Judiciary, US Chief Justice John Roberts wrote: "In the face of decades of congressional inaction, many judges who must attend to their families and futures have no realistic choice except to retire from judicial service and return to private practice.

"The numbers are sobering. In the past six years, 38 judges have left the federal bench, including 17 in the last two years. If judicial appointment ceases to be the capstone of a distinguished career and, instead, becomes a stepping stone to a lucrative position in private practice, the framers' goal of a truly independent judiciary will be placed in serious jeopardy.

"Inadequate compensation directly threatens the viability of life tenure, and if tenure in office is made uncertain, the strength and independence judges need to uphold the rule of law -- even when it is unpopular to do so -- will be seriously eroded."

I cannot recall if we have ever before had a Malaysian Luttig resigning as a superior court judge but Raja Azlan Shah, who left the bench to become the Perak Ruler, was an exceptional case.

Here, it is perhaps the reverse with mainly the successful and wealthy court lawyers who can have the luxury of aspiring to join the bench with, perhaps, only a very few who would dare even to dream of being another Zaki or Sri Ram.

I believe here we are not so much concerned about our judges leaving the judicial service for the corporate world and private practice but, rather, with judicial corruption when judges' pay is low and also the inability to attract the most talented and best legal brains to join the judicial service.

Hence, the Bar warmly welcomed the prime minister's announcement at the April 17 Bar Council dinner to review the judiciary's terms of service and remuneration.

In his speech, Datuk Seri Abdullah Ahmad Badawi said: "There is a pressing need to set salaries and compensation to the right levels to ensure that the bench attracts and retains the very best of the nation's talent. This and other measures, which will be announced in due course, will form a comprehensive package of reform to strengthen the capacity and credibility of the judiciary."

The last time we revised the basic salaries of our judges was July 1 last year vide the Judges' Remuneration (Amendment of First and Fifth Schedules) Regulations 2008. Their salaries and perks are shown in the table, but only the salaries will later determine a judge's pension.

In addition to this, it is known too that judges do apply for government land and the federal and state governments do alienate such lands to them. But, are we saying that we are paying our judges enough? I do not think so. In fact, their salaries are nowhere compared with the earnings of top litigation or corporate lawyers in this country.

One should just compare their remuneration with their counterparts in Singapore. I have not been able to locate the Singapore government gazette on the last revision of their judges' remuneration about a year or so ago, but I understand the annual pensionable salary of a Singapore High Court judge is now about S$1 million (RM2.39 million) with no perks.

Frankly, I think we have overworked our judges. Apart from having to lead a life which society expects of them, their work is unending. From hearing cases in chambers and then in open court, many of them even have to take their work home every day. Little time is left to produce good quality judgments simply because they are overwhelmed with hearing cases. They can find some time for themselves and their families perhaps only during the court vacation, and even then this short vacation period is often used to catch up with outstanding matters.

Sadly, we have too few judges around to handle the never-ending backlog of cases.

On the other hand, there are fewer cases filed in Singapore courts partly because many litigants opt for alternative dispute resolution through arbitration or mediation. Singapore judges also are assisted by an efficient electronic court system from the time of filing to hearing and finally disposing of the cases.

Here, many of our judges still have to laboriously take down by hand the notes of proceedings especially in criminal trials because the law has yet to be changed to allow electronic recording and transcription services. One can only imagine what the poor judge has to do when he has to write down every word whenever a chemist or a DNA expert gives evidence.

So, there is no surprise when de facto law minister Datuk Zaid Ibrahim revealed in Parliament on May 8 that the backlog in the High Court was 91,702 cases, with 125,944 in the Sessions Court and 777,703 in the magistrate's courts.

But, such pay is not commensurate with the extent of the judicial powers a magistrate possesses. Can a magistrate even rent a room in a city for RM250? Those posted to smaller towns may be given government quarters usually built in colonial days but more and more of such quarters have now been taken over by the local authorities for their own use.

Applying for government quarters may take months and often there is just none for such junior officers who are treated, frankly, just like any other ordinary junior civil servant by the government departments.

Then there are other expenses like car loans and utility bills.

It is, indeed, very dangerous for a cash-strapped magistrate to hear cases involving all sorts of questionable personalities. What if he is offered by an interested litigant, or lawyer for that matter, to stay in his fully furnished house for just RM250?

This reminds me of a story a judge narrated to me when he was first posted to another town. On the first day, he decided to join a magistrate for lunch at the court canteen. When he went to the counter to pay, he was politely told that a gentleman seated at the other end had already settled the bill.

To my mind, this is indeed a frightening story. Imagine for a moment if a magistrate, being the most junior judicial officer, started accepting a free cup of tea; who could tell then what he would later accept when he reached higher judicial office? Free air tickets for holidays overseas for his family?

In fact, there were many Malaysian Luttigs who gave up as Sessions Court judges and magistrates later to become successful and wealthy lawyers. Actually, it is all right for such Luttigs to leave the judicial service, but is certainly not an encouraging phenomenon if they remain within the service.

This also reminds me of the bantering words of Tun Mohamed Suffian who said at a dinner given in his honour shortly after his retirement as lord president on Nov 12, 1982:

"The morning after I retired, a Rolls Royce arrived at my house with a message that I was required to attend a very important board meeting. Without further ceremony, I was taken to the penthouse of the Chartered Bank. Here, I was appointed chairman and required to call the meeting to order.

"There were only three items on the agenda. Caviar, champagne and any other matters arising therefrom. At noon, we adjourned to a private room in the Shangri-La for a sumptuous lunch. When I was driven back home at 3pm, I greatly regretted I had not retired years earlier!"

I certainly hope the above statement will not create any Luttigs among our judges, but it is a strong message nevertheless to our government that our judges and magistrates deserve more because they undertake a sacred duty to dispense justice without fear or favour. Our judges should not be allowed to worry over money problems causing them to struggle with their conscience.

It is hoped that the government will address this serious issue together with the setting up of the Judicial Appointments Commission so that it will attract especially our best legal scholars to apply and join the judicial service. 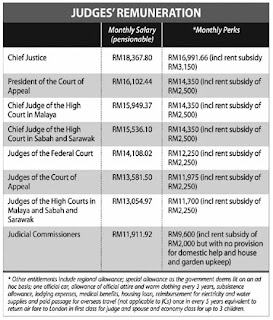