Keep our moral laws up to date 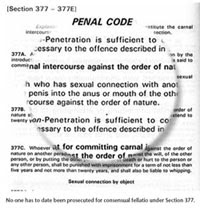 Yeo Yang Poh, a former Bar Council chairman and whose views are often sought on this subject, called this law obsolete and that it should be repealed. Yeo argued that if it was really enforced "more than 95 per cent of adult Malaysians would be in jail".

In Singapore, the courts there had to deal with this issue in several cases; one of which was Public Prosecutor v Kwan Kwong Weng 1997. The case involved a naive 19-year-old who was made to believe by the respondent that her genitals had been poisoned when her first boyfriend performed cunnilingus on her. When told that unless the poison was removed from her genitals, it would affect her future husband, she agreed to be treated by the respondent by having sexual intercourse with him.
During their second visit at the hotel, they engaged in sexual intercourse three times within a space of 21/2 hours. In between the sessions, the respondent asked the complainant to fellate him as it was necessary to balance the "ying" and the "yang" because he had used up a lot of energy and had to be revitalised.

Upon appeal, the Court of Appeal held that only coitus of the male and female sexual organs was carnal intercourse in the course of nature. However, justice Karthigesu went on to say that it is also a fact of life, in humans as well as in animals, that before the act of copulation takes place there is foreplay to stimulate the sex urge. Therefore, the appeal judge said if oral sex is indulged as a prelude or stimulant to natural intercourse, then such an act is not against the order of nature. But in all other cases, an act of fellatio will be an offence if it is performed as a substitute to natural sexual intercourse.

Needless to say, this case caused public outrage in Singapore that consensual oral sex between heterosexual couples could attract a criminal penalty. But the then chief justice of Singapore, Yong Pung How, was not amused.

In what is now known as one of his famous rants, Yong was reported to have said: "There are countries where you can go and suck away for all you are worth... People in high places do it for all they're worth... But this is Asia".

It looks like the learned chief justice may have overlooked that the world's oldest love-making book, Kama Sutra, originated from Asia, that is India, with at least one chapter devoted to oral sex.

There is a problem when criminalising sexual acts because different sections of society will have diverse standards of morality. Take the case of an elected woman representative, for example. One group will say that in this age of gender equality, a woman should be free to enjoy sex like any man, and that what she does in her bedroom is not the business of the state or anyone. But the conservative group will argue that as an elected representative, she can no longer ride on the moral high horse and is a bad role model for our youth by indulging in premarital sex.

I hate to say this, but our authorities are too slow in making our laws progressive to keep up with the times, especially in addressing the injustices caused by our antiquated laws.

Apart from Section 377A, take these three other areas of laws:

- The maximum penalty which can be imposed on a Peeping Tom is a mere RM100 under Section 14 of the Minor Offences Act, 1955.

- Section 95 of the Law Reform (Marriage and Divorce) Act 1976 relieves a non-Muslim divorced parent from his obligation of providing for a child financially after the child attains the age of 18 even though the child is still pursuing higher education.

- Section 340 of the National Land Code has still not been amended to legislatively reverse the 2000 decision of the Federal Court in Adorna Properties v Boonsom Boonyanit which held that a forger can immediately transfer a good title to a bona fide purchaser, putting every landowner at risk of losing his land to criminals and syndicates.

It is sad that nothing has yet been done to undo the above injustices despite uncountable calls over the years to the authorities to do so.

The first two issues fall within the jurisdiction of the Home Ministry while the third is under the purview of the Natural Resources and Environment Ministry. It is hoped that the above can now be added to the key performance indicators of these two ministries so that the performance of the ministers can be assessed in November.