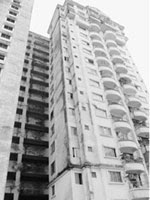 THERE are about three million Malaysians living in sub-divided buildings today. These buildings can range from low-cost apartments to the most luxurious condominium units.

One common but serious problem faced by those who manage such buildings is the difficulty in collecting maintenance charges or contributions from parcel owners.

It is, therefore, not uncommon to hear that there are:

- management corporations (MCs) which have run into deficits involving millions of ringgit because parcel owners refuse to pay contributions for years.

- buildings, especially low and medium-cost apartments, that have become enclaves for drug addicts, migrant workers and illegal immigrants because there are no funds to engage security services. As a result, the owners will not live there and residents living in the surrounding areas face a social problem.

- developers who could not find anyone interested in serving in the first MC and thereafter, or joint management body (JMB) as there is no surplus in the accounts due to a high default rate for non-payment among parcel owners.

Generally, there are two sets of laws which govern the maintenance and management of sub-divided buildings and their common property.

The Strata Titles Act 1985 (Act 318) applies to those buildings where an MC has already been established after the issuance of individual strata titles. After April 12, 2007, the Building and Common Property (Maintenance and Management) Act 2007 (Act 663) applied to those buildings without an MC by setting up a JMB.

Prior to 2004, MCs had resorted to a rather effective way to compel payment of the contributions -- by disconnecting water supply to units of defaulting owners.

But all this stopped after the case of John Denis De Silva v. Crescent Court Management Corporation 2006. In this case, the late De Silva, a retired diplomat, obtained an injunction to restrain the defendant from preventing the entry of his car as well as disconnecting the water supply for not having paid his monthly contributions.

The court held that such unilateral acts were ultra vires sections 53 and 53A of Act 318, which set out the procedures to be followed in recovering the contributions due.

Section 53 provides that if the owner fails to settle the sum due within a period of four weeks after having been served with two notices -- each requiring him to pay within two weeks after service of the notice -- then the MC may sue for the recovery of the said sum in court or, in addition or as an alternative, resort to section 53A.

The section empowers the MC to apply to the Land Administrator for a warrant to attach the movable properties of the owner found in the unit or elsewhere in the state. The properties can then be sold by public auction if the owner still fails to settle the contributions.

One other provision not mentioned by the court in the John Denis case is section 55A, which provides that any owner who has failed to pay the contributions in the manner set out in section 53 commits an offence and shall be liable on conviction to a fine not exceeding RM5,000 and to a further fine not exceeding RM50 for every day during which the contributions remain unpaid after conviction. (In Act 663, the identical provision is section 34.) It appears that to date no one has been prosecuted under this section.

However, in practice, the above methods are hardly effective in recovering the sums due from defaulting owners, especially the contumacious ones, as it takes years to obtain and enforce a judgment. The attachment mode is also ineffective because either the movable properties belong to the tenants or the premises have been stripped bare, and it is also difficult to ascertain their other properties situated elsewhere.

Some may then ask what if the right to disconnect water supply is contained in the deed of mutual covenants or house rules or by-laws?

In my opinion, the deed may not even be valid if it is signed simultaneously with the statutory sale and purchase agreement for housing accommodation without the prior approval of the Controller of Housing under Regulation 11 of the Housing Development (Control and Licensing) Regulations 1989.

Secondly, the covenants contained therein can only be considered as house rules in addition to those contained in the Third Schedule of Act 318 if they have first been passed in a general meeting by special resolution under section 44.

Even if the deed is valid or the right to disconnect is contained in the house rules, such power will still be nullified by the John Denis decision.

However, if the owner does not have any proprietary interest in the parking lot allocated by the MC, then additional by-laws may be passed by special resolution to deny the defaulting owner the allocated parking lot or the use of facilities such as the swimming pool or gymnasium.

But this does not prevent the owner from complaining to the Strata Titles Board under section 67H of Act 318 to have such by-laws revoked, and the MC may even be required to pay compensation to him if he is adversely affected by the by-laws.

While the above also applies to stratafied commercial properties, I am of the view that Act 318 and Act 663 ought to be amended to allow the MC or JMB to create a legal charge on the parcel unit belonging to a defaulting owner if the sum due is not settled after the four-week period stated in section 53. This charge should rank in priority over any prior charge created by the owner's financiers.

If the owner or his financier does not settle the sum due including any interest and legal costs within a specified period after publication of the notice of sale, then the MC or JMB can sell the unit by way of public auction if the sale has also been approved by special resolution in a general meeting.

This recovery method, widely used in many countries, has proven to be effective and our authorities should seriously consider introducing it here in the interests of all law-abiding parcel owners and the general public.