A must-read speech by Robert Kuok 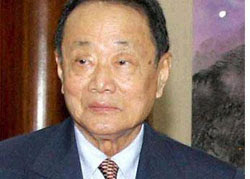 Even though it has been reproduced on many websites, below is one speech which must be read by all businessmen and politicians:

*Robert Kuok Hock Nien's notes on the past sixty years

(1) My brothers and I owe our upbringing completely to Mother. She was steeped in Ru-Jiao – the teachings of Confucius, Mencius, Laozi and other Chinese sages. Ru-Jiao teaches the correct behaviour for a human being on his life on earth. Mother gently, and sometimes strongly, drummed into the minds of her three boys the values of honesty, of never cheating, lying, stealing or envying other people their material wealth or physical attributes.

(2) Father died on 25 December 1948 night without leaving a will. Following the Japanese surrender, he had re-registered the firm as a sole proprietorship. We went to court to get an appointment as managers, permitting us to continue to manage Tong Seng & Co. The judge said that, as there were two widows, the firm and the estate should be wound up.

(3) We decide to establish Kuok Brothers Limited. In mid-January 1949, five of us met at a small roundtable in our home in Johore Bahru. Present were my MOTHER, cousin number five HOCK CHIN, cousin number twelve HOCK SENG, my brother HOCK KHEE nicknamed Philip (a..k.a. cousin number seventeen), and myself (a.k.a. cousin number twenty). We sat down and Mother said, “Nien, would you like to start?” I said, “Fine, yes I will start.” To cut the long story short, we got started, and commenced business from a little shop house in Johore Bharu on 1 April 1949.

(4) As a young man, I thought there was no substitute for hard work and thinking up good, honest business plans and, without respite, pushing them along. There will always be business on earth. Be humble; be straight; don’t be crooked; don’t take advantage of people. To be a successful businessman, I think you really need to brush all your senses every morning, just as you brush your teeth. I coined the phrase “honing your senses” in business: your vision, hearing, sense of smell, touch and taste. All these senses come in very useful.

(5) Mother was the captain of our ship.. She saw and sensed everything, but being a wise person she didn’t interfere. Yet she was the background influence, the glue that bound the Group together. She taught my cousins and my brothers and me never to be greedy, and that in making money one could practise high morality. She stressed that whenever the firm does well it should make donations to the charities operating in our societies. She always kept us focused on the big picture in business. For example: avoid businesses that bring harm, destruction or grief to people. This includes trades like gambling, drugs, arms sales, loan-sharking and prostitution.

(6) We started as little fish swimming in a bathtub. From there we went to a lake and now we are in the open seas.. Today our businesses cover many industries and our operations are worldwide but this would not have been possible without the vision of the founding members, the dedicated contributions and loyalty of our colleagues and employees, and very importantly the strong moral principles espoused by my mother.

(8) Among the first employees were Lau Teo Chin (Ee Wor), Kwok Chin Luang (Ee Luang), Othman Samad (Kadir) and an Indian accountant called Joachim who was a devout Roman Catholic and who travelled in every day from Singapore where he lived.

(9) I would like on this special occasion to pay tribute to them and in particular to those who were with us in the early days; many of whom are no longer here. I have already mentioned Lau Teo Chin (Ee Wor) and Kwok Chin Luang (Ee Luang) and Othman Samad (Kadir), there are others like Lean Chye Huat, who is not here today due to failing eyesight, and Yusuf Sharif who passed away in his home country India about one and a half years ago and the late Lee Siew Wah, and others who all gave solid and unstinting support and devotion to the Company. It saddens me that in those early difficult years these pioneers did not enjoy significant and substantial rewards but such is the order of things and a most unfortunate aspect of capitalism. However through our Group and employee Foundations, today we are able to help their descendants whenever there is a need to.

(10) I have learnt that the success of a company must depend on the unity of all its employees. We are all in the same boat rowing against the current and tide and every able person must pull the oars to move the boat forward. Also, we must relentlessly endeavour to maintain and practise the values of integrity and honesty, and eschew and reject greed and arrogance.

(11) A few words of caution to all businessmen and women. I recall the Chinese saying: shibai nai chenggong zhi mu (failure is the mother of success). But in the last thirty years of my business life, I have come to the conclusion that the reverse phrase is even truer of today’s world: chenggong nai shibai zhi mu. Success often breeds failure, because it makes you arrogant, complacent and, therefore, lower your guard.

(12) The way forward for this world is through capitalism. Even China has come to realise it. But it’s equally true that capitalism, if allowed to snowball along unchecked, can in many ways become destructive. Capitalism needs to be inspected under a magnifying glass once a day, a super-magnifying glass once a week, and put through the cleaning machine once a month.

In capitalism, man needs elements of ambition and greed to drive him. But where does ambition end and greed take over? That’s why I say that capitalism, if left to its own devices, will snowball along, roll down the hill and cause a lot of damage. So a sound capitalist system requires very strongly led, enlightened, wise governments. That means politician-statesmen willing to sacrifice their lives for the sake of their people. I don’t mean politicians who are there for fame, glory and to line their pockets.

(13) To my mind the two great challenges are the restoration of education in morals and the establishment of a rule of law. You must begin from the root up, imbuing and infusing moral lessons and morality into youth, both at home and from kindergarten and primary school upward through university. To accept the principle of rule of law; then you have to train upright judges and lawyers to uphold the legal system.

(14) Wealth should be used for two main purposes. One: for the generation of greater wealth; in other words, you continue to invest, creating prosperity and jobs in the country. Two: part of your wealth should be applied to the betterment of mankind, either by acts of pure philanthropy or by investment in research and development along the frontiers of science, space, health care and so forth.

*Tan Sri Robert Kuok Hock Nien (born 6 October 1923, in Johor Bahru, Johor), is an influential Malaysian Chinese businessman. According to Forbes his net worth is estimated to be around $10 billion on May 2008, making him the richest person in Southeast Asia. He is media shy and discreet; most of his businesses are privately held by him or his family. Apart from a multitude of enterprises in Malaysia, his companies have investments in many countries throughout Asia. His business interests range from sugarcane plantations (Perlis Plantations Bhd), sugar refinery, flour milling, animal feed, oil and mining to finance, hotels, properties, trading, freight and publishing.