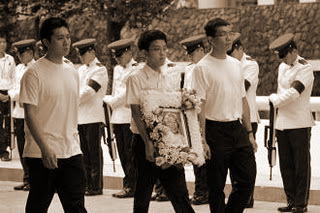 
Eulogy by Li Shengwu, 25, eldest son of Lee Hsien Yang
'To everything there is a season,
A time for every purpose under heaven:
A time to be born,
And a time to die;
A time to weep,
And a time to laugh;
A time to mourn,
And a time to dance;
A time to gain,
And a time to lose.'
Ecclesiastes 3: 1-6, with some lines omitted
ONE of our family's abiding institutions is the Sunday Lunch. Our three (once four) generations gather at Oxley Road on Sundays and share a meal.
When I was little, the grandchildren tended to eat far too fast and play far too loudly. I remember Nai Nai's good humour as we mistook her rocking chair for a climbing frame. In lieu of a television, Nai Nai provided a tall, well-stocked bookshelf next to the children's table, and thereby contributed much of my early childhood literacy.
She chose our books well, and the selection was expansive, ranging from Peter Rabbit to a picture book on exotic animals (on the lowest shelf), from Roald Dahl to Arthurian legend (on the higher shelves). I never saw what was on the highest shelf; it was a very tall bookshelf and I was not a very tall child.
Little did I suspect that the best books were on a yet higher shelf; up the stairs and in Nai Nai's bedroom, where she kept the accumulated stories of a lifetime's reading - a hoard of Chaucer and Shakespeare, the Sejarah Melayu, Confucius and Mencius - to which the cheery bookshelf downstairs was a mere shadow or stepping stone.
The King Arthur of Roger Lancelyn Green occupied the downstairs bookshelf; the King Arthur of Thomas Malory held court upstairs.
Without her urging or insistence, I inherited her love of the kind of stories that are now called fairy tale or fantasy, but used to be, simply, stories. It took me more than a decade to discover The Odyssey, Beowulf and Le Morte D'Arthur, but Nai Nai had the patience to sow the kind of seeds that take long to bear fruit.
Nai Nai had the benefit of a classical education, and upon returning from my studies overseas, I discovered that she had long been reading the Greek philosophers that I had of late come to appreciate.
Well-worn copies of Plato's Republic and Symposium occupied places near her bedside. I wish we'd had the chance to talk about them.
It is well to say that Nai Nai lives on in memory, but she was more than memory. She was a great person; lively, quick-minded and kind.
Her passing is to us an inconsolable loss, and it cuts keenly. Tolkien's The Lord Of The Rings has for decades been a family favourite. In its final chapters, at the parting of the fellowship, the wizard Gandalf counsels, 'Go in peace! I will not say, 'Do not weep!', for not all tears are an evil.'
Ye Ye and Nai Nai's lives are a story to occupy many volumes. Coming late into the narrative, I am a minor character who has missed many chapters. I cannot bear witness to the earlier plot twists, climaxes and denouements. But I know that they have loved one another steadfastly, through many trials and joys. The Bard tells us:
'Love is not love
Which alters when it alteration finds,
Or bends with the remover to remove:
O no! It is an ever-fixed mark
That looks on tempests and is never shaken;
It is the star to every wandering bark,
Whose Worth's unknown, although his height be taken.
Love's not Time's fool, though rosy lips and cheeks
Within his bending sickle's compass come:
Love alters not with his brief hours and weeks,
But bears it out even to the edge of doom.'
Nai Nai and Ye Ye have been, to me, an example of that kind of love.
Nai Nai's grandchildren arrived relatively late in her life, and she loved each one dearly.
When Huanwu and I were children, we became entangled in a book on Cat's Cradle, a game of string figures played with a loop of twine and four hands. Seeing our difficulty, Nai Nai carefully unknotted our initial attempts, and showed us new spiderweb configurations mentioned nowhere in the book's pages.
She passed to her grandchildren a love of learning and reading, as well as the kind of knowledge not found in print.
Samuel Butler wrote:
'I fall asleep in the full and certain hope
That my slumber shall not be broken;
And that though I be all-forgetting,
Yet shall I not be forgotten,
But continue that life in the thoughts and deeds
Of those I loved.'
We love you, Nai Nai, and we will remember you.
Posted by Roger Tan at Wednesday, October 06, 2010