High time for a new Bar

A common evaluation system is needed urgently to check the declining quality and standard of new lawyers in the country.

It is a matter of grave concern that with about 1000 law graduates entering the legal profession every year, there is no common evaluation system to ascertain and ensure their levels of competence.

The Bar Council has been advocating a Common Bar Course and Examination (CBE) since the 1980s as a single entry point to the legal profession for both local and foreign law graduates.

It is understood that the delay in implementing the CBE is partly due to objections from local universities.

But it cannot be gainsaid that the quality and standard of lawyers have also declined significantly since the 1980s. There is a common feeling among senior legal practitioners that there is an “abject absence of rudimentary legal skills” among the new entrants.

In 2008, a senior judge lamented on the poor quality of locally trained lawyers, describing their standard as ranging from the “good to the grotesque”. (However, some senior lawyers had also opined that the learned judge’s assessment applied equally to the quality of judges since the 1980s.)

For example, one senior lawyer related this incident to me involving a senior assistant registrar (SAR) and lawyers for both the plaintiff and defendant. The SAR was tasked to read the judge’s order relating to costs. Both lawyers recorded the amount of costs with interest at the rate of 80%!

Hence, the point is, how could one have walked out of the court without even understanding the court’s order? If the parties were not able to understand the order, then they would also not be able to draft the order later. If what the plaintiff’s counsel had said about the SAR and the other counsel was true, then indeed all the three legally trained officers – SAR and the two lawyers - were indeed half-past-six professionals!

Besides the decline in lawyering quality, there is an abysmal language skill especially the command of the English language among the new entrants for practice at the Bar. I have personally received a letter from a young lawyer asking me to “ensure that (our) clients would be executed the documents!”

It follows that it is not unjustified to require the new entrants to also pass an English Language Qualifying Examination. Whilst we can blame this decline on our education system, we cannot ignore the fact that we are living in an increasingly competitive global environment where international business is transacted primarily in English.

It is also in the national interest for us to build up a pool of competent practitioners in international law so that we can put across our nation’s case in international forums and courts, which is made all the more necessary after the Pulau Batu Puteh case before the International Court of Justice.

In fact, there were 13,350 practising lawyers in Peninsular Malaysia as of Dec 31 last year, with more than half having obtained their basic law degree overseas.

The Legal Profession Act, 1976 (LPA) governs the admission of new entrants from various streams to the legal profession as an advocate and solicitor.

To be admitted to the Malaysian Bar, one has to be a “qualified person” as defined in the LPA; attain the age of 18; be of good character and not been adjudicated bankrupt or convicted of any offence; be a citizen or permanent resident of Malaysia; have served nine months of pupillage under a lawyer of at least seven years’ experience; and have passed, or be exempted from, the Bahasa Malaysia Qualifying Examination.


Three tables containing the relevant information of the legal practitioners and their qualifications have been provided, and let me expound on it a little.
Table 1 deals with the academic qualifications of a ‘qualified person’, and the following should be noted:

> The qualifications, except for graduates of Universiti Malaya, National University of Singapore and barristers of England, are determined from time to time by the Legal Profession Qualifying Board (Qualifying Board) which is chaired by the Attorney-General. Any change to the status of the three aforesaid qualifications can only be made by way of a statutory amendment to the LPA.

> The two-year exemption from Certificate in Legal Practice (CLP) examination given to law graduates of Universiti Utara Malaysia (UUM) and Multimedia University (MMU) in 2009 will expire on April 15, unless extended indefinitely or for a further period by the Qualifying Board.
Table 2 particularises the qualifications of the 13,350 lawyers as at Dec 31 last year. It is interesting to note that the International Islamic University is the single university which has produced the largest number of lawyers in Malaysia. 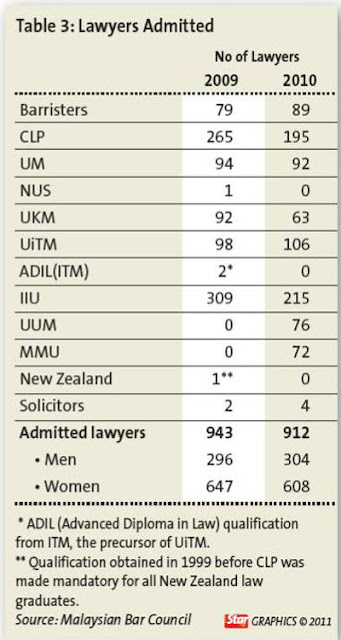 As regards Table 3 which shows the number of lawyers admitted in 2009 and 2010, it is obvious that women have been busy becoming lawyers in the last two years!

It follows that as Malaysian lawyers are coming from so many diverse educational streams, there is an urgent need for uniformity by undertaking a critical review of the entire legal education especially when we are producing a surfeit of lawyers annually.

Need to be professional

It is for this reason that there have been constant calls for many decades now for the CBE to be implemented as the ultimate sieve in the admission of new practitioners in order to ensure lawyering quality and competency.

Further, the CLP course has to be replaced by the CBE because it is too examination oriented, and not practical skills oriented. This is understandable as the CLP was originally designed in 1984 only as a temporary stop-gap measure to assist those Malaysians who were not able to sit for the English Bar Finals Examinations because they failed to obtain at least a Second Class (Lower Division) Honours in their British university law degree.

To my mind, law schools should just concentrate on the academic aspect of legal education, and leave the professional training in the form of CBE to the Qualifying Board, Bar Council and the Judicial and Legal Services. Passing the CBE should not just be the pre-requisite for new entrants to the legal profession, but also for new recruits for the Judicial and Legal Services.

Pending the implementation of the CBE, the Qualifying Board should also periodically review the teaching and training of law graduates from our local universities. If the standard is not maintained, then the exemption from the CLP examination currently granted to their law graduates should be removed.

As regards foreign law graduates, the Qualifying Board has already reduced the number of approved British universities from 66 to just 30, and Australian and New Zealand law graduates are now required to sit and pass the CLP examination even if they have been admitted as barristers or solicitors in New Zealand or any state of Australia.

In this regard, the Qualifying Board should be commended for setting up in 2008 an evaluation team headed by the Chief Registrar of the Federal Court which comprised judges, officers from the Attorney General’s Chambers and senior members of the Malaysian Bar to determine if UUM and MMU law graduates should be exempted from the CLP examination. As a result, law graduates from the two universities are now required to undergo a training course on practical skills before they can become “qualified persons” under the LPA even though they are exempted from the CLP exam. This exemption will expire on April 15, and the team would return soon to the universities to undertake a review.

In fact, so much has already been said and written in the last 20 years about the urgent need of reforming our decrepit legal education, and we are already sorely lagging behind many Commonwealth countries in this respect. But regrettably, there appears to be a total lack of a sense of urgency on the part of the various stakeholders to come to grips with this unsatisfactory state of affairs which is certainly not in the public interest.

*The writer is the head of the Bar Council’s evaluation team appointed by the Qualifying Board to assess the Bachelor of Law degree of UUM and MMU to determine if their graduates should be exempted from the CLP examination. You can follow him on Twitter at www.twitter.com/rogertankm.
**I wish to register my appreciation to Chin Oy Sim, Kwan Yin Cheng, Ezane Mansor Obaid and Lilian Chong of the Bar Council Secretariat for gathering and providing me useful information for this article.

The above article was first published in The Sunday Star on 6 February 2011.
Posted by Roger Tan at Sunday, February 06, 2011