Bar Council criticised over its stand 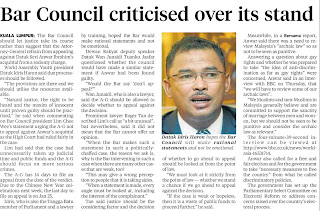 New Sunday Times
KUALA LUMPUR: The Bar Council should let justice take its course rather than suggest that the Attorney-General refrain from appealing against Datuk Seri Anwar Ibrahim's acquittal from a sodomy charge.
World Assembly Youth president Datuk Idris Haron said due processes should be followed.
"The provisions are there and we should utilise the resources available.
"Natural justice, the right to be heard and the maxim of innocent until proven guilty should be practised," he said when commenting on Bar Council president Lim Chee Wee's statement urging the A-G not to appeal against Anwar's acquittal as the High Court had ruled fairly in the case.
Lim had said that the case had unnecessarily taken up judicial time and public funds and the A-G should focus on more serious crimes.
The A-G has 14 days to file an appeal from the date of the verdict. Due to the Chinese New Year celebrations next week, the last day to file an appeal is on Jan 25.
Idris, who is also the Tangga Batu member of Parliament and a lawyer by training, hoped the Bar would make rational statements and not be emotional.

Dewan Rakyat deputy speaker Datuk Wan Junaidi Tuanku Jaafar questioned whether the council would have made a similar statement if Anwar had been found guilty.
"Would the Bar say 'don't appeal?'"
Wan Junaidi, who is also a lawyer, said the A-G should be allowed to decide whether to appeal against the decision.
Prominent lawyer Roger Tan described Lim's call as "a bit unusual", but nevertheless, said it did not mean that the Bar cannot offer an opinion.
"When the Bar makes such a statement in such a politically-charged case, the reason we ask is, why is the Bar intervening in such a case when there are many other cases that are weak, too?
"This may give a wrong perception to people that it is taking sides.
"When a statement is made, every angle must be looked at, including the interest of the complainant."
Tan said justice should be the considering factor and the decision of whether to go ahead to appeal should be looked at from the point of law.
"We must look at it strictly from the point of law -- whether we stand a chance if we go ahead to appeal against the decision.
"If the case is weak or hopeless, then it is a waste of public funds to proceed further," he said.
Meanwhile, in a Bernama report, Anwar said there was a need to review Malaysia's "archaic law" so as not to be seen as punitive.
Answering a question about gay rights and whether he was prepared to take "the idea of anti-discrimination as far as gay rights" were concerned, Anwar said in an interview with BBC on Thursday, that "we will have to review some of our archaic laws".
"We Muslims and non-Muslims in Malaysia generally believe and are committed to support the sanctity of marriage between men and women, but we should not be seen to be punitive and consider the archaic law as relevant."
The four-minute-39-second interview can be viewed at http://www.bbc.co.uk/news/world-asia-16531714.
Anwar also called for a free and fair election and for the government to take "necessary measures to free the country" from what he called discriminatory policies.
The government has set up the Parliamentary Select Committee on Electoral Reform to address concerns raised over the country's electoral process
Posted by Roger Tan at Sunday, January 15, 2012