GE13: Do not politicise the pulpit

When spiritual leaders start to use the church to make fun of the government or endorse a particular political party or candidate, this is wrong.

ON April 15, Roman Catholic Bishop Dr Paul Tan Chee Ing lambasted the government for holding the 13th general election on a Sunday. Tan warned, as reported in a Malaysiakini article, “Bishop says Sunday ballot a bane to Christians”, that for this reason, he would urge Catholics in his diocese to consider carefully before voting.

It is surprising that this Bishop of the Diocese of Malacca-Johor who was also someone who had helped found the Catholic Research Centre could have got his facts so wrong. In this respect, I could not have agreed more with Austin Gonzales’ response to Tan’s unwarranted outbursts (see “Is Bishop Paul Tan being insensitive and callous?”, The Star, April 18) except to reiterate that, firstly, it is not the government but the Election Commission that fixed the election date. Secondly, the 7th, 8th and 11th general elections were all held on a Sunday – Aug 3, 1986, Oct 21, 1990, and March 21, 2004.

If Tan feels so strongly that Catholics in his diocese should not be inconvenienced on a Sunday because it is a holy day, then all the more he should urge them to consider carefully before voting for PAS as the weekly holiday may well be changed to a Friday should they come into power!

I am sure Tan’s sentiments are not shared by many Christian Malaysians. In fact, I am rather concerned that lately the pulpit has been misused for political purposes. Just last Sunday, one woman pastor in an established Kuala Lumpur church purportedly said over the pulpit without any substantiating evidence that thousands of foreigners would be voting in this election.

In the Facebook Group of the Anglican Diocese of West Malaysia, someone was even allowed to post that Sunday had been chosen in order to enable phantom votes to take place in the morning when Christians are worshipping in church! This is indeed a colossal exaggeration. There was also another posting there heaping praise on PAS for fielding Hu Pang Chow, a Christian, in this coming election.

To my mind, what Tan and the woman pastor did was to sow hatred and make their believers angry. They have obviously forgotten the Prayer of St Francis of Assisi to become instruments of peace so that where there is hatred, may they sow love, and where there is injury, pardon.

Tan, in particular, should be reminded by what Pope Francis said recently that hypocrisy has undermined the church’s credibility. In the pontiff’s words: “Inconsistency on the part of pastors and the faithful between what they say and what they do, between word and manner of life, is undermining the Church’s credibility … Those who listen to us and observe us must be able to see in our actions what they hear from our lips, and so give glory to God.”


In fact, I have no problem with our clergy members speaking out on issues close to the laity’s hearts such as social justice. Perhaps Tan should be even more vocal in asking the Vatican to investigate and expedite the investigation into the various allegations of sex abuse in some Catholic churches!

But when spiritual leaders start to use the pulpit to make fun of the government or endorse a particular political party or candidate, this is wrong.

This is not about them exercising their constitutional right to free speech. Neither is it about calling on Christians to fulfil their duty to vote, which is spiritually innocuous and should be encouraged.

Of course, Christians should take a keen interest in politics and keep themselves abreast with its latest development. But politics must stop at the doorstep of the church. Period. The church represents the body of Christ and no one should abuse it. The body of Christ must always remain united, and the Church as God’s sanctuary should be the place where people find and experience love, faith and hope.

They should always bear in mind God’s greatest commandment in Matthew 28:19-20 that they bring salvation to the unbelievers. If anyone is turned away because of the sermons delivered from a politicised pulpit, then these servants of God have failed in their duty. At the same time, they must remember that while there may be 10 members in the congregation praying for Pakatan to win the general election, there could also be an equal number of congregants, if not more, praying for a victory by the Barisan Nasional. Hence, if these clergy members want to indulge in politics, they must disrobe first.

It follows that if spiritual leaders take sides in this general election, which is expected to be the most acrimonious and divisive in the history of our nation, how will they thereafter be able to bring healing and reconciliation to His sheep under their care?

It is hoped that our clergy members would lead the way in becoming the salt and light of the world by observing the beatitudes which Jesus has taught us in Matthew 5:1-14, one of which is “blessed are the peacemakers, for they will be called children of God”.

Personally, I have over the years in my own little ways helped various churches on a pro bono basis, including:

> the withdrawal of land acquisition, subdivision and re-alienation, approval of building plans of the Holy Light Church (English) at Taman Ponderosa, Johor Baru, and financial grants amounting to RM700,000 from both the federal and state governments for the construction of its RM4mil worship and multi-purpose hall.

> the gazettal of Kebun Teh Christian Cemetery in Johor Baru to be managed by Holy Light Church (Chinese).

> the approval of the building plans for St Stephen’s Anglican Church in Yong Peng and alienation of one-acre land next to the church for its use.

> the amendment to the land title for the Truth Presbyterian Church in Kota Tinggi.

My wish is that newly elected state governments will expedite the approval process for the erection of non-Muslim places of worship. They should each set up a non-Muslim affairs department to look into their grouses and problems. Applications should not be referred to a security committee because Christians are not a threat to security of the state or nation.

Having said that, I must put on record that I, too, have helped various Muslim bodies, including providing pro bono legal services to the Johor Muslim orphans in successfully recovering and repossessing 2,700 acres of their land in Kota Tinggi in 2004.

However, what I am against is for religion to mix with politics. Our forefathers expect religious bodies to remain non-partisan. That is why Article 11(2) of the Federal Constitution provides tax exemption for religion-based purposes.

For this reason, I could not vote for any political party which is based on religion and that includes PAS. Unless PAS amends its constitution, especially clauses 3 to 8, it remains their aim to set up a theocratic state which is against the spirit of the Federal Constitution.

As a Christian, I cannot accept this, and what Hu is doing is highly inappropriate. I can only ask God to forgive him for he knows not what he is doing. 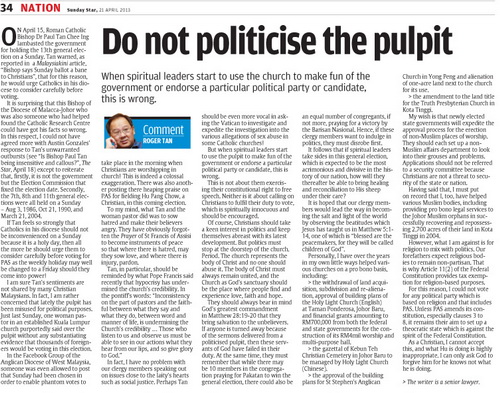