The stink of injustice

The police have to explain their tardiness in investigating the most infamous land forgery case in Malaysia.

This is a heart-rending story, a story about an incessant quest for justice by three generations of a Thai family.

During his lifetime, Sie visited Penang very often with his Thai wife, Boonsom Boonyanit, also known as Sun Yok Eng. They loved Penang and her people so much that they had intended to build their retirement home on the said lands. On Jan 18, 1967, the two lots of land were transferred to Boonsom by way of a memorandum of transfer (“Form 14A”).

Under section 81(3) of the National Land Code (Penang and Malacca Titles) Act 1963 (Act 518), Form 14A was then treated more or less as proof of ownership over the said lands. Section 92 of Act 518 also provides that pending the issuance of a final title, an advance certificate of title (“ACT”) would be issued. Since Jan 18, 1967, Boonsom had been at all times in possession of the Form 14A apart from faithfully paying all the quit rents and assessments due on the said lands.

Some time in June 1989, Boonsom’s eldest son, Phiensak Sosothikul, chanced upon an advertisement in a Thai newspaper, Thairat, dated June 11, 1989, which was inserted by a law firm from Penang, Messrs Khor, Ong & Co (“KOC”). The advertisement requested that any person who had any right to the said lands or any heir to Boonsom residing at a house No. 87, Cantonment Road, Penang, Malaysia to contact KOC. The court was later told that when Boonsom’s accountant did contact KOC, the latter could not give any useful information.

Boonsom then engaged the law firm, Messrs Lim Kean Siew & Co (“LKSC”) to conduct investigations which revealed that the said lands had been fraudulently transferred by an impostor claiming to be Boonsom to Adorna Properties Sdn Bhd, then known as Calget Sdn Bhd (“Adorna”) on May 24, 1989.

Boonsom then sued for the return of the said lands. The Penang High Court ruled in favour of Adorna on April 28, 1995. On appeal, the Court of Appeal in its judgment dated March 17, 1997 reversed the High Court’s decision. Adorna then appealed, and the Federal Court comprising Eusoff Chin, Wan Adnan Ismail and Abu Mansor Ali allowed Adorna’s appeal in its judgment dated Dec 13, 2000 and pronounced in open court on Dec 22, 2000 (“Adorna Judgment”). Sadly, Boonsom had already passed away on May 23, 2000.

Boonsom’s second son, Kobchai Sosothikul, being the representative of her estate, soldiered on and filed two separate motions to the Federal Court for review of the Adorna Judgment.


In the first attempt, Kobchai argued that when the Adorna Judgment was delivered, Eusoff Chin had already retired on Dec 19, 2000. Steve Shim, Haidar bin Mohd Noor and Mokhtar Abdullah dismissed this application in its judgment dated Feb 26, 2001.

In the second attempt, the Federal Court comprising P.S. Gill, Rahmah Hussein and Richard Malanjun ruled on Aug 27, 2004 that the Adorna Judgment was not patently wrong to have resulted in grave injustice.

On March 15, 2005, Kobchai sued the Penang land office for negligence and breach of statutory duty. On Jan 10, 2011, Judicial Commissioner Vazeer Alam Mydin held that the Penang land office was indeed negligent and in breach of statutory duty, but unfortunately the action had to be dismissed because it was time-barred as it was filed 36 months late under the Public Authorities Protection Act 1948.

Interestingly, a strong five-member bench of the Federal Court had finally decided on Jan 21, 2010 in Tan Yin Hong v Tan Sian Sang to reverse the Adorna Judgment as the error committed in the Adorna Judgment was, in the words of the then Chief Justice, Tun Zaki Tun Azmi, “so obvious and blatant”. But it came too late for the Boonsoms.

In fact, my committee and I had also held discussion with two successive Ministers of Natural Resources and Environment, Datuk Seri Azmi bin Khalid and Datuk Douglas Uggah Embas, on July 24, 2007 and Nov 6, 2008 respectively and later with the Attorney-General, Tan Sri Abdul Gani Patail with the view of amending section 340 of the National Land Code, 1965 to legislatively reverse the Adorna Judgment. But it now appears that the decision in Tan Ying Hong has rendered the proposed amendments unnecessary.

Sadly, there is no way the Boonsoms can ever recover the said lands. On Oct 7, 2004, Adorna sold the said lands to Diamaward (M) Sdn Bhd, a subsidiary of Hunza Properties Berhad, for RM13,220,000. Today, what is on the said lands is the Infinity Beachfront Condominium. Strata titles have been issued to the individual parcel owners.

In fact, in his judgment, Vazeer made a very strong observation: “In the beginning, I alluded to the fact that this is the sequel to a sad saga, which is now part of the annals of the nation’s legal history. The helplessness of the plaintiff in the face of the fraud perpetrated leading to the loss of the said lands is very evident.

“The apparent negligence and breach of statutory duty by the defendant and the complete inaction of the police in bringing the forger and fraudster to book is very disturbing indeed. After all, the fraudster was represented by a firm of solicitors in Penang in the transfer of the said land to Adorna and there would have been sufficient leads for investigations.”

After reading all the judgments related to this case, I too was troubled by the following facts revealed in there:

> Two police reports were lodged – on July 12, 1989 by lawyer Ooi Chooi Li from LKSC and on July 22, 2002 by Kobchai but there has not been a whisper from the police since 1989, especially its Commercial Crimes Department.

A day later, the impostor signed the memorandum of transfer (“MOT”) in favour of Adorna, not before her lawyer from KOC, but in the presence of Arifin bin Awang, then an Assistant District Land Administrator of Bukit Mertajam. Arifin (now a Datuk) is now the Director of Land and Mines of Penang but he was never called as a witness in any court proceeding. The MOT also revealed when the said lands were transferred to Adorna, final title for Lot 3606 held under Grant (First Grade) Registration No. 28476 had also been issued. All this took place in just a matter of months! In fact, Vazeer held in his judgment that by not calling Arifin to testify in court, an adverse inference could be drawn under section 114(g) of the Evidence Act 1950.

> According to Lim Chan Hwa of CA Lim & GE Tan Sdn Bhd, valuers and estate agents, he was first asked by one Fong Wa Tan, a director of Adorna, to do a valuation of the said lands some time in July 1988. (But Fong testified that he was first approached by Lim in late October 1988 regarding the said lands.) Lim also testified in court that he was also first asked by one Victor Joseph Dass of Messrs Victor Real Estate Agency to look for a purchaser for the said lands. The sale option by the impostor was dated Nov 13, 1988 and this was given to Lim’s company through KOC under cover of their latter dated Nov 11, 1988. In this letter, it also referred to two ACTs.

This means ACTs for the said lands had even been issued before the sale and purchase agreement was signed on Dec 15, 1988 (SPA). In the SPA, the impostor was represented by KOC. The impostor put her address in the SPA as under the care of one Saifi bin Daud of No. 8, Taman Fauziah, Jalan Satu, 01000 Kangar, Perlis. Her signature was attested by lawyer Khor Kheng Loon from KOC. But Victor and Khor were not called as witnesses in any court proceeding.

> According to Cheong Wai Meng, lawyer who acted for Adorna in the sale and purchase, the purchase price of RM1,865,798 was fully paid to KOC on April 17, 1989. The advertisement in the Thai newspaper was dated on June 11, 1989. The first police report was made on July 12, 1989. As Khor was not called as a witness in court, no evidence was proffered as to who eventually received the purchase price from Khor and when was this done and through what means.

It follows that the police have a lot of explanation to do for being more than tardy in investigating the most infamous land forgery case in Malaysia.

On the part of the Penang state government, I was rather surprised that it had sought to raise the defence of limitation of time to avoid liability, especially when Lim Kit Siang himself has for many years described this case as “gross injustice”. Legally, the Penang government may be right to have done so, but morally it is hoped that the Penang government will now at least tender an apology to the Boonsoms even though the event took place under the previous administration.

I can only conclude that this is one injustice that stinks to high heavens! Unless this stink is removed, it will indelibly remain a huge dent on foreign investors’ confidence in our land offices, police investigations and the administration of justice. 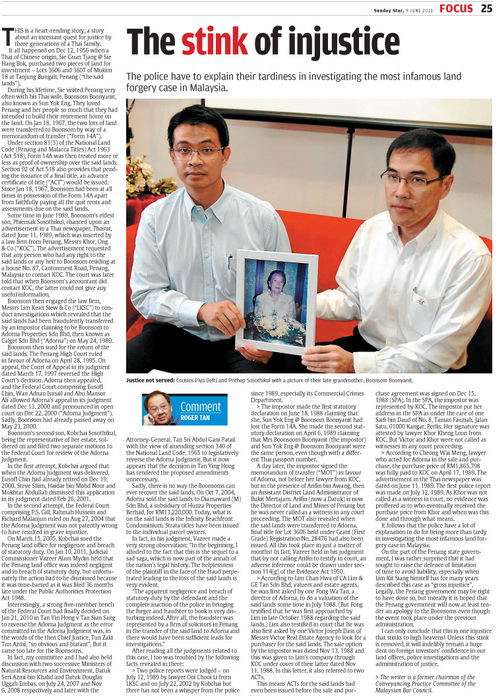