There should be a law to deal with all matters relating to our water resources, including management and preservation of rivers.

THERE is a saying that if you follow the river, you will find the sea. But these days, this may not literally be the case any more. The old river may have already turned into a stream or its path has been severely obstructed by waste.

Yet, whenever there is a flash flood, we would blame nature for causing the river to burst its banks. Take the Gombak River, for example. The flood problem has been there ever since the beginning of the century.

As someone related to me, during the great flood of 1920 when Kuala Lumpur was inundated with a metre of water, workers had to paddle to work in sampans! When the water receded, the Chartered Bank, located at Benteng, actually spread millions of soggy bank notes to dry on the Selangor Club’s field (now Dataran Merdeka)!

In another big flood a few years later, even the body of a tiger was swept through the city from upstream!

Hence, Malaysians must realise, if not begin to realise, that whatever you throw into the drain will eventually flow into the river. Waste must be properly disposed of, otherwise it will clog the drains and rivers. Similarly, if you discharge any environmentally hazardous substance into the river, it will cause pollution.


I am sure millions of consumers in the Klang Valley will remember how they were affected by water cuts on Merdeka Day when oil was allegedly deposited into the Selangor River by a company.

I, therefore, cannot emphasise enough how important it is that we ought to love and treasure our rivers because they provide the source of our lives – drinking water.

However, the management of these river basins is governed by laws passed separately by the relevant states. The reason is because under the Federal Constitution, matters relating to water (including rivers and canals but excluding water supplies and services), control of silt and riparian rights are for the individual states to legislate.

Having said that, Article 76(1)(b) of the Federal Constitution does allow the federal parliament to make laws with respect to any state matter for the purpose of promoting uniformity of the laws of two or more states, but such laws will only come into operation in any state until it has been adopted by a state law enacted by the state legislature. Thereafter, the enactment will be treated as a state law and not a federal law, and may be amended or repealed by a law made by that state legislature.

In fact, the Waters Act, 1920 (Act 418), now a federal law, is still in operation. Section 2 provides that it shall only apply to Negri Sembilan, Pahang, Perak, Selangor, Malacca, Penang and the Federal Territory. However, all west Malaysian states including Johor, Kedah, Perlis, Kelantan and Terengganu have adopted it by way of enacting a state law which repeats the provisions of Act 418.

But Act 418 is an outdated legislation. Section 7A, which deals with prohibition of pollution of rivers, does not even provide a penalty for it. This provision also does not apply to Selangor and Penang. The maximum penalties provided for other breaches only amount to RM1,000! 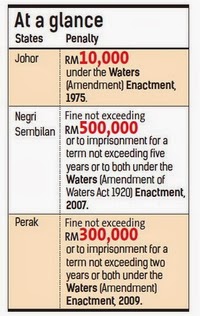 However, to my mind, this fragmented legislative framework is rather unhealthy, especially as there exist vast disparities in the penalties imposed. While some states have passed new and comprehensive state enactments to deal with their water resources, others such as Johor are still applying the archaic provisions of Act 418 which they have adopted.

It is my considered opinion that a new federal law has to be enacted to replace Act 418. This new law should deal with all matters relating to our water resources, including management and preservation of rivers, water catchment areas, ground water, lakes and dams and the prevention of pollution.

Currently, for example, there is no specific legislation dealing with dams. At most, there are only some administrative guidelines.

Hence, laws need to be put in place to govern the management of dams especially when some dams are already being managed by privatised entities such as Tenaga Nasional Berhad, not excluding the PUB dam in Johor which is managed by Singapore.

There ought to be a single national body which helps the individual states to implement a new and comprehensive law relating to water resources to be adopted by all the states in West Malaysia.

One good example is the office of the Director General of Land and Mines based in Putrajaya which helps the individual states to implement the National Land Code, 1965.

The federal government must therefore initiate and chart a course for all states to follow and adopt by implementing an integrated water resources management system. The states, on the other hand, must cooperate in the national interest by accepting uniformity in laws relating to water resources without any fear that their legislative powers will be usurped by the federal government. 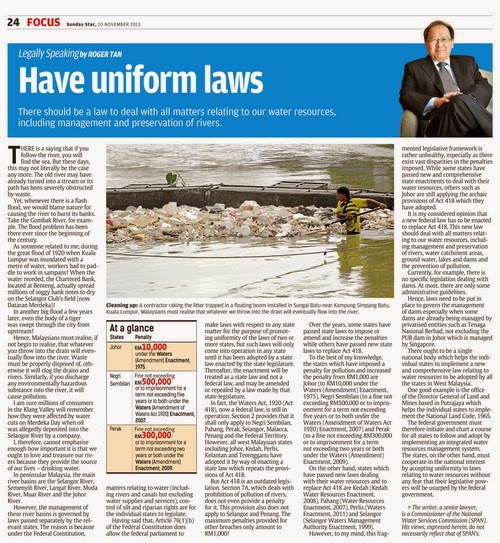