Justice at all cost for MH17


States whose citizens perished in the tragedy can pursue the perpetrators in their domestic courts if their criminal laws have extra-territorial jurisdiction.


SINCE Thursday, I have been thinking how horrible it must have been, the final moments of their lives, when they knew the plane was going down.

“Did they lock hands with their loved ones, did they hold their children close to their hearts? Did they look each other in the eye, one final time, in a wordless goodbye? We will never know.

“In the last couple of days we have received very disturbing reports, of bodies being moved about, being looted of their possessions.

“Just for one minute, I want to say that I am not addressing you as representatives of your countries, but as husbands and wives, fathers and mothers. Just imagine you first get the news that your husband has been killed, and within two or three days, you see images of some thug removing the wedding band from their hands. Just imagine that this could be your spouse.

“To my dying day, I will not understand that it took so long for rescue workers to be allowed to do their difficult jobs. For human remains to be used in a political game?”

Those were the sad words of the Dutch Foreign Minister, Frans Timmermans, when he delivered his heart-rending speech at the UN Security Council (UNSC) on July 21 on the downing of MH17. More than two thirds of MH17 victims were Dutch.

Almost at the same time, our Prime Minister Datuk Seri Najib Tun Razak managed to pull off a major diplomatic coup by quietly arriving at an agreement with the leader of the pro-Russian separatist group, Alexander Borodai, that finally broke the impasse and secured the release of the black boxes and remains of the victims of MH17.

“In recent days, there were times I wanted to give greater voice to the anger and grief that the Malaysian people feel. And that I feel. But sometimes, we must work quietly in the service of a better outcome,” said Najib.

In this sense, Malaysia’s foreign policy, which is based on non-alignment and neutrality, may have just paid off.

Be that as it may, Malaysia must still register our absolute outrage, in the strongest possible terms, over the shooting down of MH17. At the time of writing this, investigators still do not have unimpeded access to the crash site and remains of some of the victims are reportedly still on the site.

But as the Australian Foreign Minister Julie Bishop put it aptly: “We must have answers, we must have justice, we owe it to the victims and their families to determine what happened and who was responsible.”

Also, the UNSC Resolution 2166 on MH17 has demanded that “those responsible for this incident be held to account and that all States cooperate fully with efforts to establish accountability”.

But sadly, men’s greatest sin is always forgetting about tragedies and not learning from them.

On Sept 1, 1983, Korean Airlines Flight 007 was shot down by a Soviet fighter jet near Moneron Island, west of Sakhalin Island over the Sea of Japan. All 269 passengers and crew on board were killed. General Anatoly Kornukov, who was then commander of Dolinsk-Sokol Air Base, Sakhalin, gave the order to shoot down KAL007 without verifying that it was a civilian aircraft.

In 1998, Russia’s president, Boris Yeltsin, even made him chief of the Russian Air Force. The Ukrainian-born Kornukov remained unrepentant throughout. He died early this month. Russia had neither apologised nor made any compensation.

On July 3, 1988, US navy missile cruiser USS Vincennes shot down Iran Air Flight 655 in the Persian Gulf after mistaking it for an Iranian fighter jet. All 290 on board died. President Ronald Reagan and his deputy George Bush Senior refused to apologise. It was not until 1996 that President Bill Clinton’s administration finally expressed “deep regret” over the tragedy and paid the Iranian government US$131.8mil, of which US$61.8mil went to the victim’s families.
Iran, which at this time had referred the matter to the International Court of Justice, then withdrew it.

In 1990, Vincennes’ chief officer Captain William Rogers even received the Legion of Merit “for exceptionally meritorious conduct in the performance of outstanding service”!

So, will MH17 end up one day as another forgotten story, just like KAL007 and IranAir655?

However, Malaysia, which owns the aircraft, and Russia, who is accused of assisting the rebels who allegedly shot down MH17, are not signatories to the Rome Statute.

Ukraine, on the other hand, only accepted ICC’s jurisdiction over crimes committed between Nov 21, 2013 and Feb 22, 2014 – the period of civil unrest which ousted Ukraine’s previous pro-Russian leader Viktor Yanukovych.

Hence, ICC will lack the jurisdiction to deal with this tragedy. Even though Article 13(b) of the Rome Statute allows the UNSC to refer the crime to the ICC, this will unlikely happen because Russia will veto any resolution authorising it.

Further, to prosecute the perpetrators for crimes against humanity and war crimes, the ICC Elements of Crime would require the ICC prosecutors to show that the civilian aircraft MH17 had been intentionally targeted and that they knew the plane they were shooting down was a civilian aircraft. So far, reports tend to indicate that it was downed by mistake.

It is, therefore, an uphill task to resort to ICC by showing that the perpetrators’ acts were indiscriminate by not taking sufficient steps to ascertain the status of the aircraft. A fortiori, it is unfortunate that the crash site has already been compromised and evidence may have already been contaminated or tampered with.

Taking into account the long and tedious prosecutorial process of ICC, it may be more practical to haul up these perpetrators before a domestic court. Ukraine can only do so if it can subsequently win the civil war and wrest control of the self-declared Donetsk People’s Republic.

But States whose citizens had perished can pursue the perpetrators in their domestic courts for murder or manslaughter if their criminal laws have extra-territorial jurisdiction. In fact, the Netherlands has already commenced investigation under its International Crimes Act which allows the Dutch courts to have jurisdiction over any genocide, crimes against humanity and war crimes committed abroad against her citizens.

Malaysia too may even have jurisdiction to pursue murder and manslaughter charges under our Penal Code pursuant to section 26 of the Civil Aviation Act, 1969 which states: “Any act done by any person on Malaysian aircraft outside of Malaysia which, if it had been done by him in Malaysia, would have constituted an offence under the laws of Malaysia, shall, for the purposes of criminal proceedings in Malaysia against that person in respect of that act, be deemed to have been done by him in Malaysia.”

Of course, the only argument, albeit a weak one, against it is that this was not an act done “on” the aircraft but “to” the aircraft! Having said that, the biggest hurdle will still be to get the perpetrators deported or extradited to the relevant States. For example, Article 61(1) of the Russian Constitution prohibits any Russian citizen to be deported from Russia or extradited to another State.

If the pro-Russian rebels are found to be responsible and they seek refuge in Russia who can also always make them Russian citizens, then deportation and extradition will be legally insurmountable.

If the individuals cannot be held to account, then Malaysia and other States may have to refer any offending State to the International Court of Justice, just like how Iran took the US to the ICJ over the downing of Iran Air 655. Depending on the evidence, it will be either Ukraine or Russia, as Donetsk People’s Republic is not a recognised sovereign state.

But it will be difficult to found a case against Russia under international law unless there is evidence to link the downing of MH17 to Russia, such as Russia is the one who supplied the missiles to the rebels or it was shot down by Russian officers or by the pro-Russian separatists acting on Russia’s instruction or under Russia’s direction or control or Russia has acknowledged and adopted the acts committed by the rebels as that of its own conduct.

Indeed, the road ahead in securing justice for MH17 victims is a long and arduous one, but we must never give up at whatever cost. Nothing is impossible if we stay united and move forward as a cohesive nation by never forgetting the injustice caused to MH17 and the victims. 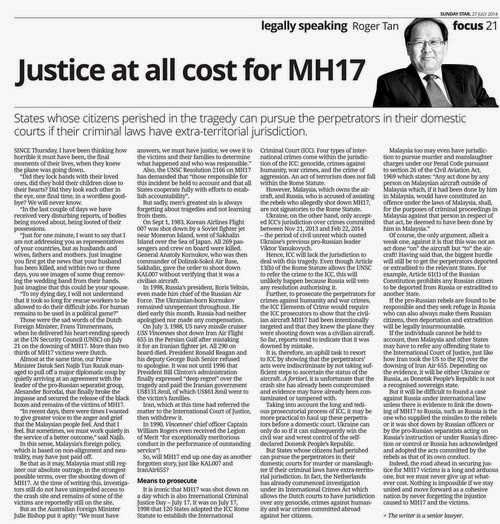