The Sunday Star
Legally Speaking by Roger Tan
Is judicial review the correct procedure to challenge the validity of a statute?

IN the last two weeks, two interesting cases relating to homosexual and cross-dressing men were dealt with by the appeals courts in Singapore and Malaysia. However, the manner in which the two courts interpreted the equipollent provisions of our respective Constitution, described as consanguineous with one another as well as that of the United States and India, differed sharply.

In the Singapore case of Lim Meng Suang vs Attorney General, 2014, the highest court in Singapore, the Court of Appeal, ruled in a 101-page judgment on Oct 29 that section 377A of the Penal Code, which criminalises physical intimacy and sex between men, was not unconstitutional.

The appeals were brought by gay couple Lim Meng Suang and Kenneth Chee Mun-Leon who have been in a romantic and sexual relationship for the past 15 years, and Tan Eng Hong who had been arrested for engaging in oral sex with another man in a public toilet cubicle in 2010.

In a nutshell, the appellants had questioned the constitutionality of section 377A on the following grounds:

> that it infringed Article 9 of the Singapore Constitution (SC) that “no person shall be deprived of his life or personal liberty save in accordance with law”;

> that it infringed Article 12 SC in that “all persons are equal before the law and entitled to the equal protection of the law”; and

> that section 377A was a colonial legislation incorporated into the Singapore Penal Code in 1938 when she was a British colony and prior to the promulgation of SC.

Senior Counsel Deborah Barker (daughter of Singapore’s first post-Independence Minister of Law, EW Barker) argued for the gay couple that the right to life and personal liberty under Article 9 should also include a limited right of privacy and personal autonomy allowing a person to enjoy and express affection and love towards another human being.

Delivering the judgment of the court, Justice Andrew Phang Boon Leong ruled that the phrase “life or personal liberty” in Article 9 when read in entirety refers only to a person’s freedom from an unlawful deprivation of life and unlawful detention or incarceration. Period.

He went on to caution that foreign cases (with particular references to those decided by the Indian Supreme Court) that have conferred an expansive constitutional right to life and liberty should be approached with circumspection because they were decided in the context of their unique social, political and legal circumstances.

As regards Article 12 SC, the court applied the Malaysian case of Malaysian Bar v Government of Malaysia, 1987 in that to determine the constitutionality of a statute under Article 12 SC, the test is one of reasonable or permissible classification. It is a two-stage test which is applied only if the impugned statute is discriminatory in nature.

In other words, any law that treats people differently can still be held as constitutional if it passes this test.

Firstly, the discriminatory statute falls within a classification founded on an intelligible differentia, that is, it is capable of distinguishing persons that are grouped together from others outside the group.

Secondly, the differentia has a rational relation to the objective of the impugned statute. In the view of the apex court, section 377A has satisfied this test because it is easily discernible that it is against men who perform acts of gross decency with other men and the objective is to preserve societal morality.

As respects section 377A being a colonial legislation, the court held that section 377A constitutes part of the corpus of Singapore law as Article 162 SC provides for the continuation of pre-independence laws after the coming into force of SC.

Further, the court held that Article 12(2) SC did not expressly provide that a Singaporean could not be discriminated on the grounds of sex, gender or sexual orientation unlike Article 8(2) of the Malaysian Constitution, which expressly includes the word “gender” or section 9(2) of chapter 2 of the Constitution of South Africa, which expressly prohibits discrimination on the grounds of “race, gender, sex, pregnancy, marital status, ethnic or social origin, colour, sexual orientation, age, disability, religion, conscience, belief, culture, language and birth.”

We agree with the Judge that the scientific evidence on this particular issue is – contrary to what Mr Ravi submitted – unclear inasmuch as there is no definitive evidence pointing clearly to one side of the divide or the other. In any event, as just mentioned, the court is not in a position to arrive at a conclusive determination on this issue. Again, this argument should – if at all – be addressed by the legislature instead.”

All in all, the apex court is saying, regardless of whether Singapore judges are described as timorous souls or bold spirits, the court cannot assume legislative functions to become a mini-legislature, and that there is nothing the court could do to assist the appellants whose remedy should lie in the legislative sphere.

Now to the Nov 7 decision of our Court of Appeal in Muhamad Juzaili Bin Mohd Khamis & Ors v Negri Sembilan State Government, 2014. In this case, the court struck down section 66 of the Syariah Criminal Enactment (Negeri Sembilan), 1992 which criminalises Muslim men for cross-dressing as unconstitutional and therefore void for being inconsistent with the supreme law, namely Articles 5 (right to life and liberty and equivalent to Article 9 SC), 8 (equality before the law and equivalent to Article 12 SC), 9(2) (freedom of movement) and 10(1)(a) (freedom of expression) of the Federal Constitution.

First, I do not think this case involves a conflict of syariah and civil laws albeit it deals only with Muslim men who suffer from gender identity disorder (GID). It is also a non-issue that under the Constitution, only the Federal Court is seised with constitutional jurisdiction to determine the competency of both the federal and state legislatures to enact laws and their validity.

Hence, the issue is very much whether the Court of Appeal’s decision is tantamount to trespassing into the legislative sphere.

At first glance, critics will argue that the Singapore case is an example of judicial restraint at its worst by deferring to the legislature, and the Malaysian case, judicial activism at its best which may, however, also be criticised as bordering judicial populism or judicial excessivism!

It is said that the Court of Appeal was merely applying extant interpretation adopted by our superior courts when dealing with fundamental liberties provisions of the Constitution.

Most significantly, the court followed earlier judicial decisions which adopted Indian constitutional jurisprudence that the right to life and liberty under Article 5 should include right to live with dignity and right to livelihood and quality of life.

The court also held that there was a breach of Article 8(2) on gender discrimination because the impugned section 66 dealt only with Muslim men cross-dressing while Muslim women who cross-dress are not prohibited.

That said, devoid of any disrespect to GID sufferers, as a lawyer and I believe for many colleagues of mine, law students and academics, it would be interesting to see how our Federal Court deals with the following issues, if advanced, upon appeal:

> Is judicial review the correct procedure to challenge the validity of a statute for being unconstitutional when there is already a procedure for this as set out in Article 4(4) (read together with Article 128(1)) of the Constitution, that is, it can only be determined by the Federal Court after leave from a Federal Court judge has first been obtained? That was exactly how the validity of section 53(1) of the Syariah Criminal Enactment (Negeri Sembilan), 1992 was referred to the Federal Court in Fathul Bari bin Mat Jahya & Anor v Majlis Agama Islam Negeri Sembilan & Ors, 2012 after the first petitioner was charged and the second petitioner also charged for aiding and abetting the former in conducting a religious talk to non-family members outside his residence without a tauliah (licence) from the Tauliah Committee.

> Should Malaysian courts now be more wary in further adopting the Indian constitutional jurisprudence after taking into account our mores and local circumstances?

> Will our apex court follow the above decision of the Singapore Court of Appeal in that this is a matter best left to the legislature to come to grips with?

> What is the definition of “gender” in Article 8(2) of the Constitution? Is it immutably only a male or female or a third gender has been created to include, for example, a transgender because it is a natural and intractable attribute and disposition just like how the Muslim nation of Bangladesh has decided to recognise them as a third gender called Hijras?

The writer, a senior lawyer, appreciates that this topic evokes strong passion and emotion but this article is strictly and solely written from a legal angle. The views expressed are entirely the writer’s own. 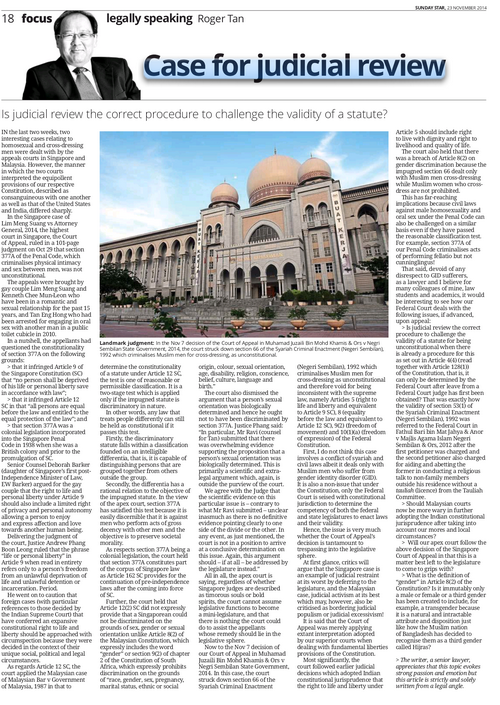