Tribute to my mum on this Mother's Day 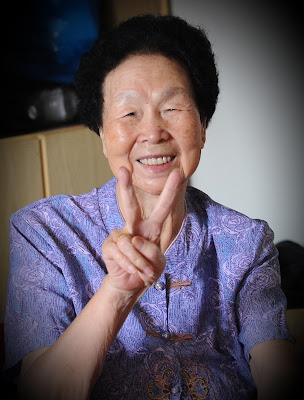 NEVER FORGOTTEN, ETERNALLY GRATEFUL: On this Mother’s Day, let me pay tribute to this woman I have the privilege of calling Mum (1925-2015). Though forever missed, we will never forget what she had gone through in her mortal life - a lot of suffering and trials; living in poverty; but always standing by her husband our dad throughout who later went missing in May 2000, at the same time looking after all of us. This video resonates with us how bad life was in the 1960s and 1970s, but never forgetting for a single moment one of the most important values of Chinese culture - our filial piety towards our parents.

In fact, mum had a miscarriage during her first pregnancy when she was 18. When her first child, a girl, was finally born, mum was a weak and frail 19-year-old girl herself. It was also in this year (1943) that our paternal grandmum in her 40s died. Believing that the newly born girl had brought bad luck to the family, maternal grandmum then decided to let the poor baby girl die in the cold outside.

She came over to Malaya with Dad in March 1947. They first settled down in Sepang, Selangor and toiled hard as pig-farmers there. A son was shortly born but died a few days later, again. Still childless at this time, they decided to adopt a girl in 1948 in the belief that later pregnancies would be smooth going. In November 1949, their own child, a girl, was born and this was followed by a son in October 1951. Much to their dismay, one more miscarriage happened in 1952. In June 1955, they were blessed with another daughter. But life then was still bad, and they lived in poverty and under the constant fear of the communist insurgents which Malaya was fighting at this time. As the pig farm was located far away from home, their livelihood was severely affected by the many curfews imposed by the security forces. When another girl was born in 1957, like so many other Sepang residents then, they had no choice but to give the child up for adoption by the Christian missionaries in now known as the Convent High School, Seremban. Years later, it was discovered from the records kept at the Seremban Convent High School and confirmed by the National Registration Department that the baby girl named Mary Agatha Tan Ah Siew had died 3 months after her admission from pneumonia.


In 1958, they decided to move down to Yong Peng. The family of 6 lived in a small rented room. There, another girl was born in 1959. With the proceeds of the sale of the Sepang house and the pig farm together with the pigs and some borrowings from relatives, Dad bought a 6-acre piece of land in Yong Peng for 800 dollars which he later planted it with rubber trees. It was also in early 1970s that I learnt how to tap rubber trees.

But our access to education finally broke the chains of poverty. We managed to give her and Dad a better life from the late 80s onwards, leading to the great celebration of her 80th and 90th birthdays.

Happy Mother's Day to all mothers. Thank you for all your sacrifices.🙏