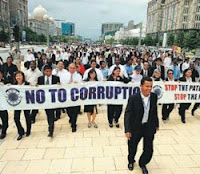 There were only two other occasions when lawyers walked in the 60 years of the Malaysian Bar's history.

On April 7, 1981, about 200 lawyers marched from the Lake Club to Parliament House to protest the tabling of the Societies (Amendment) Bill 1981.

Then on Dec 4, 1998, about 100 Kuala Lumpur-based lawyers marched on the Court of Appeal in support of lawyer Zainur Zakaria who was appealing against a three-month jail sentence for contempt in the trial of Datuk Seri Anwar Ibrahim.

On Sept 26, about 2,000 lawyers walked in the spirit of camaraderie for 3.5 kilometres from the Palace of Justice to the Prime Minister's Department, and then stood in the rain in support of their leaders who later submitted two memoranda to the Prime Minister's Office, urging the government to set up a Royal Commission of Inquiry to probe the state of judiciary and a commission on judicial appointments and promotions.

In fact, it was unwise earlier on for the police to stop seven buses ferrying lawyers from entering Putrajaya. By making these 200 stranded lawyers - who are mainly younger ones who hitherto had hardly experienced any deprivation of rights - walk an extra five kilometres or so from the highway to the Palace of Justice, this long march will now surely ignite a spark in their hearts to take up issues affecting the citizens’ rights.

The Sept 26 “Walk for Justice” was peaceful, symbolic and meaningful. Lawyers, regardless of age, race, religion (including Muslim lawyers despite their fasting) and gender, had come out from the comforts of their air-conditioned rooms on a working day to make a statement - obviously not a political one, for otherwise they would have donned their black robes walking down the boulevard, comparing themselves with the red-robed monks marching in the streets of Yangon.

While the walk by members of this noble profession may have warmed the cockles of many hearts, the idea to walk has also appeared to be anathema to some.

Immediately, de facto Law Minister Datuk Seri Nazri Aziz described the conduct of the lawyers as “unbecoming". The Sin Chew Daily even reported the lawyer-turned-politician going as far as to describe those who participated in the walk as having the brains of an opposition party when in fact many of the brains who took part are members of Barisan Nasional component parties.

Then Bernama quoted Information Minister Datuk Seri Zainuddin Maidin calling on members of the Bar to set up a commission to investigate the “unprofessional conduct of their leaders".

Well, it is hoped that by now, the minister has cooled down a little. In fact, Nazri is correct to say that currently the Bar and the government enjoy an excellent working relationship. This is, in no small measure, attributable to the minister and the Bar Council appreciates it. It cannot be gainsaid too that “Walk for Justice” had been possible because of the openness practised by the Abdullah administration.

In fact, both the minister and the Bar are on the same track in protecting the judiciary, except that each is looking at the issue from a different angle. The minister is concerned that the lawyers’ action would undermine public confidence in the judiciary. The lawyers, on the other hand, being stakeholders in the administration of justice, are concerned with what they saw and heard in the video clip. They now find themselves in the vanguard against bad judges when the video clip has threatened the independence of the judiciary.

In fact, to lawyers, this episode which is more important than the nude-squat incident, affords the Abdullah administration an opportunity to set up a Royal Commission of Inquiry to restore public confidence in the judiciary which has been severely eroded since the 1988 judicial crisis.

In any event, the Bar Council has postponed the extraordinary general meeting fixed for Saturday, maybe to a date after the independent panel's report. Members of the investigation panel can expect the Bar to go through its report with a fine-toothed comb.

The oft-misunderstood role of the Bar is best explained by former prime minister, Tun Hussein Onn: “It is the duty of the legal profession to uphold the cause of justice without fear or favour. To effectively discharge this role, the profession must remain independent and be seen to be so. The Bar has a duty to speak up on matters of public interest affecting citizens’ rights and comment on proposed legislation affecting such rights.

“In doing so, the Bar must be constructive and must conduct itself with decorum. The government must appreciate the role of the Bar and be respectful of its comments - even when it differs with the profession's views.”
Posted by Roger Tan at Monday, October 01, 2007