By Shaila Koshy
KUALA LUMPUR: If the syndicates keep their game up, they would have committed over 140 cases of fraud and forgery involving land dealings by the end of this year.
In the first quarter alone, the police recorded 37 cases.
According to Mohd Shukri Ismail, the Research and Development Section director at the Land and Mines Department (Federal), the process of administration of land dealings under the National Land Code did not appear to make it easy to commit fraud.
However, he acknowledged there were weaknesses within the land registration offices and the conveyancing system as well as problems in detecting forgery that needed to be addressed.
If not, the enterprising fraudsters will keep raking in millions of ringgit by selling or mortgaging someone else’s land.
“Between 2005 and April this year, the only state where no police report was lodged on fraud and forgery was Perlis,” said Mohd Shukri in his paper on ‘Measures undertaken to safeguard against fraud in land dealings’, presented during the recent 15th Malaysian Law Conference.
According to Commercial Crime Department statistics, the highest number of cases occurred in Sabah (86), followed by Selangor (56), Penang (47) and Kuala Lumpur (35).
While land owners, banks and conveyancing lawyers have been preoccupied with the changing interpretation of an indefeasible (secure) title under the land code in cases of forgery, syndicates focused on adapting their operations to the legal position of the day.
Mohd Shukri said based on police investigations, the majority of fraud occurred before the registration of the title.
Noting that all the cases in the table involved a dramatic increase in the use of false and forged documentation and fictitious identities, he said the rise in fraud had serious implications for conveyancers.
Listing the various measures put in place by the Natural Resources and Environment Ministry through the Lands and Mines Department, Mohd Shukri said a review of the land code was currently under way and the introduction of the several measures were being considered, among them:
● Torrens Insurance principle – compensation to innocent parties in consequence of fraudulent title;
● New provisions for electronic land dealing and electronic submission of applications;
● Establishing a “Land Court” to resolve land disputes; and
● Certificate of Correctness – a guarantee by a lawyer or real estate agent that the Registrar of Land Titles may accept an instrument at its face value. 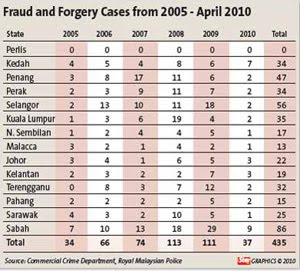