Putik Lada: Importance of making a will

When a non-Muslim dies without making a will, his estate will be distributed according to the law, except in the case of insurance and EPF savings, where the nominees are the beneficiaries.

AS WE are all mortals, and death often comes like a thief in the night, we owe it to our loved ones to make a will during our lifetime. I would like to advise our readers on the importance of making a will, and the consequences of not making one.

By not making a will, you will not be able to distribute the assets according to your wishes after your death. Instead the state will define who will actually benefit from your death.

When a person dies without making a will, he is said to have died intestate. His property is called his “estate”, and his children, his “issue”.


The relevant law which deals with the distribution of the property of an intestate is the Distribution Act, 1958 (“Distribution Act”), which only applies to non-Muslims in Peninsular Malaysia.

Under the Distribution Act, the word “child” means a legitimate child, and where the deceased had more than one lawful wife, includes a child by any of such wives and any child adopted under the Adoption Act, 1952.

The word “issue” means the deceased’s children and includes the descendants of his deceased children. It also includes any child who at the date of the deceased’s death was still in the womb but subsequently born alive.
On the other hand, “parent” is defined as the natural mother or father of a child, or lawful mother or father of a child adopted under the Adoption Act 1952.

An intestate’s estate will be distributed among his surviving family members according to the Distri­bution Act. The same law applies to male and female deceased persons.

Section 66(1) of the Law Reform (Marriage and Divorce) Act 1976 provides that the wife who is judicially separated from her husband at the time of the latter’s death is still entitled to the property of the deceased husband in the same way as a surviving spouse as if no judicial separation had been made, but not vice versa.

As for divorced spouses, they remain surviving spouses until the decree (divorce order) is made absolute.

Generally, the estate will be distributed among the deceased’s immediate family: his parents, his spouse, and his issue.

The distribution of the estate of an intestate is shown in the accompanying table. 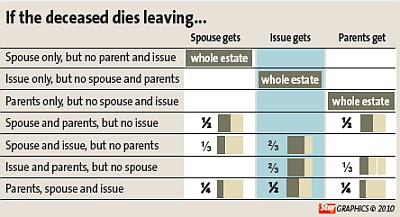 If a person dies leaving no parent, spouse and issue, his estate will go to the following persons in equal share in the following order of priority:

If a person dies leaving no parent, spouse, issue, and any of the family members mentioned, then the whole estate goes to the Government.

If the intestate has more than one lawful wife, then such wives shall share among them equally the share which the wife of the intestate would have been entitled to had such intestate left only one surviving wife.

Section 7 of the Distribution Act also provides that when the intestate and his/her spouse have died in circumstances rendering it uncertain which of them survived the other, then notwithstanding any rule of the law to the contrary, it will be regarded as if the spouse had not survived the intestate.

Also, the above will not apply if the deceased has left a valid will. But, under the Inheritance (Family Provision) Act 1971, the court still has the power to make reasonable provisions for the maintenance of certain dependants of the intestate.

Similarly, the Distribution Act will not apply in situations where an insurance policy holder has nominated a beneficiary pursuant to section 165 of the Insurance Act 1996 and the nominee has made a claim on the policy moneys within 12 months of the insurance company becoming aware of the policy holder’s death notwithstanding earlier notification to the policy holder.

Finally, readers should also note that if a person dies intestate, the procedure for applying letters of administration will differ from one who has left a valid will.

If the intestate has left an estate consisting wholly or partly of immovable property situated in Malaysia which does not exceed RM2mil in total value, then the Small Estates (Distribution) Act 1955 treats this as a small estate, in which case petition for distribution has to be made to the Land Administrator.

Otherwise, all applications for letters of administration or probate are made to the High Court.

In conclusion, readers are also advised that they should engage the services of a lawyer to draft a valid will and have it efficiently administered. Do not be hoodwinked by mendacious claims of unqualified will writers that they are experts in this area.
Published in The Star on 19 August 2010
Posted by Roger Tan at Thursday, August 19, 2010