The Sunday Star
Legally Speaking by Roger Tan
Our enforcement officers must appreciate, if not be made to appreciate, that it is the cornerstone of our criminal justice system that a person, including a suspect, is innocent until proven guilty.

ON June 28, Justice Datuk V.T. Singham indeed retired with a bang! Two days before his retirement, he awarded RM751,709 in damages and another RM50,000 in costs to the family of Kugan Ananthan who died while in police custody on Jan 20, 2009.

In delivering his judgment, he also reportedly urged the government to urgently set up the Independent Police Complaints and Misconduct Commission (IPCMC) as recommended by the 2005 Royal Commission to enhance the operation and management of the Royal Malaysia Police (RCI).

However, at the time of writing this piece, his written judgment is still not available. In any event, the government and the IGP are expected to appeal against his decision.

This reminds me of the case of Mohd Anuar Sharip who vomited blood, collapsed and died in a police cell on Aug 19, 1999. In June, 2010, Justice Lee Swee Seng awarded about RM1.6mil in damages to his widow, Suzana Mohamad Aris. However, Lee’s decision was subsequently reversed by the Court of Appeal. In October 2010, Suzana failed to obtain leave from the Federal Court to appeal against the decision of the Court of Appeal.

But it is worthy to reiterate Lee’s words when he handed down his judgment: “Let the message go forth from this place that any more deaths in police custody would be one too many! Those with power to arrest and detain must ensure that the basic human rights (sic) of a detainee to seek medical treatment while in custody, is immediately attended to. There should be no more wanton and wasted loss of life in police custody for every life is precious … The safest place to be in should not by default be turned into the most dangerous place to be taken to.”


This is in line with the oft-quoted words of Lord Bingham of Cornhill in the decision of the House of Lords in Amin, R (on the application of) v Secretary of State for the Home Department, 2003. In this case, a young offender was murdered by his cell-mate due to the latter’s racial antipathy against the victim. Lord Bingham said: “This means that a state must not unlawfully take life and must take appropriate legislative and administrative steps to protect it. But the duty does not stop there. The state owes a particular duty to those involuntarily in its custody ... Such persons must be protected against violence or abuse at the hands of state agents. They must be protected against self-harm. Reasonable care must be taken to safeguard their lives and persons against the risk of avoidable harm ... But in any case where a death has occurred in custody, it is not a minor or unimportant duty. In this country ... effect has been given to that duty for centuries by requiring such deaths to be publicly investigated before an independent judicial tribunal with an opportunity for relatives of the deceased to participate. The purposes of such an investigation are clear: to ensure so far as possible that the full facts are brought to light; that culpable and discreditable conduct is exposed and brought to public notice; that suspicion of deliberate wrongdoing (if unjustified) is allayed; that dangerous practices and procedures are rectified; and that those who have lost their relative may at least have the satisfaction of knowing that lessons learned from his death may save the lives of others.”

Last month, Home Affairs Minister Datuk Seri Dr Ahmad Zahid Hamidi revealed that there were 231 custodial deaths between 2000 until May 2013. Of these, Zahid said only two cases involved foul play and they are understood to be that of Kugan in 2009 and, recently, N. Dharmendran. He went on to say that the allegation that there were many custodial deaths, and that it was racially motivated, was merely a perception.

If this is the case, then indeed the government and the police are suffering from a serious perception problem. In the first place, no inquest was held for every custodial death when an inquest is mandatory for every death in police custody under section 334 of the Criminal Procedure Code (CPC). The RCI Report noted that out of 80 custodial deaths between January 2000 and December 2004, inquests were held for only six of these deaths.

Further, the Enforcement Agency Integrity Commission (EAIC) too is suffering from the perception problem. In fact, I respectfully disagree with Singham weighing in judicially on the ongoing debate to support the inception of IPCMC when the executive branch of the government was in favour of EAIC and the Opposition, the IPCMC. But EAIC by its own volition had also just shot at its own foot by appointing former Deputy Inspector-General of Police Tan Sri Mohd Jamil Johari and former Bar Council chairman Lim Chee Wee as its consultants to a task force set up to investigate custodial deaths.

Firstly, no police personnel, whether current or former, should even be involved in any investigation into custodial deaths if EAIC is to be perceived as independent. This is particularly so when it involved Dharmendran and R. James Ramesh who died in police custody in order to counter allegations of police prevarications. Secondly, Lim may be a former president of the Malaysian Bar, but according to EAIC website, one of its Commission members, Vinayak Prabhakar Pradhan, is also his partner in their law firm, Skrine. If EAIC were a local authority, it would have expressly infringed provisions of the Local Government Act, 1976.

Be that as it may, it is sad to see that even at its infancy stage, EAIC fails when it should have zealously espoused and embraced for its own survival the fundamental values of independence, integrity, transparency and good governance required of an enforcement body such as EAIC.

Having said that, I do welcome the government’s announcement to establish a permanent coroner’s court to deal with custodial deaths. But it will still be a waste of time if the enabling law does not provide, for example, the following:

> A coroner should not be a junior judicial officer such as a magistrate. He should be at least either a senior Sessions Court judge or a High Court judge depending on the severity of the case.

> The process should be adversarial and not inquisitorial in nature. Relatives of the deceased should be made a party to the proceedings with a right to call and cross-examine witnesses.

> The various inhibitions to early disclosure of documents and information should be removed as currently there are just too many excuses and exceptions for important materials to be kept secret.

> Section 112 of CPC, which currently allows a witness to refuse to answer any questions which may incriminate him, should be dispensed with. In other words, all police officers and any persons who appear in the Coroner’s Court are compelled to give evidence and they cannot claim this privilege against self-incrimination. However, any such self-incriminating evidence can be rendered not admissible in any subsequent criminal proceedings filed against them.

In conclusion, I cannot emphasise enough that there can be no public confidence in the system if there continues to be government inaction and a culture of impunity when it comes to dealing with custodial deaths. A Malaysian’s right to life is enshrined in Article 5 of the Federal Constitution, and it is incumbent upon our law enforcement officers to uphold this. Custodial deaths are, therefore, unacceptable and inexcusable in a civilised society. Our enforcement officers must appreciate, if not be made to appreciate, that it is the cornerstone of our criminal justice system that a person, including a suspect, is innocent until proven guilty. This principle not only protects those suspects who are under their care, but also those police officers who are suspected of police brutality. But that does not mean that those who have already been convicted and are in the prison should be treated otherwise than what Lord Bingham has elucidated above.

It follows the government must urgently either overhaul EAIC or establish an independent police oversight body such as IPCMC with powers as suggested in the RCI’s Report. Do not drag any more. The reason is simple. This culture of impunity must not be perpetuated. It must be immediately discarded for the sake of our future generations. Otherwise, it remains a national shame.

Hence, it is apposite to remind the government what the RCI said on page 122 of its report: “Of growing concern around the world is the ‘culture of impunity’ within police forces and the PDRM is not exempted ... culture of impunity feeds on itself. When officers act in contravention of laws and regulations without fear of investigation or reprimand, the culture of impunity begins to develop. Each wrongdoing that is not investigated or punished or is supported by higher ranks within the police leadership leads to the perception that such misconduct is permissible. As each new generation of officers observes and learns from their superiors, the culture becomes embedded in all the ranks of the PDRM.” 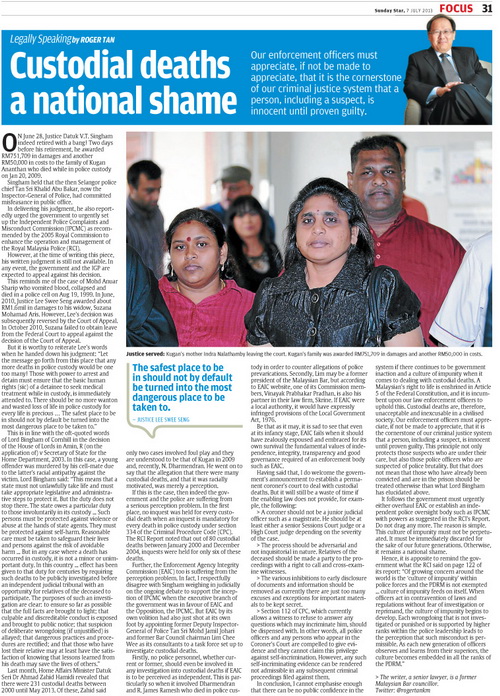