Working together for a cleaner world


Malaysians still have a lot to learn about solid waste management.


FROM Oct 22 to Oct 24, an important world event, which took place at Kuala Lumpur Convention Centre, almost went unnoticed by the general public.

The event was the congregation of the best in the waste management industry at the World Congress of the International Solid Waste Association (ISWA). Some 1700 over participants from 64 countries took part.

Four years ago, the Waste Management Association of Malaysia (WMAM), the national member of the ISWA, led by its Chairman, Ho De Leong, had gone to great lengths to bid successfully for this most important annual event of ISWA to be held here.

Regrettably, when it came to the big day, the Housing and Local Government Minister, Zuraida Kamaruddin was not able to officiate it due to her parliamentary obligations. She was represented by her deputy, Datuk Raja Kamarul Bahrin Shah Raja Ahmad. However, the Secretary General of the ministry, Datuk Seri Mohammad Mentek, was most supportive by making an effort to be present at several sessions. The Secretary General of the Water, Land and Natural Resources Ministry Datuk Dr Tan Yew Chong was equally supportive. And what is most gratifying to note is that 99% of the participants who were surveyed said they were most satisfied with our beautiful Malaysia being the destination for this year’s world congress.

But then again, what is most alarming is Malaysians are generally ignorant about solid waste management. Most will immediately ask what is actually “solid waste”. In simple terms, it is any unwanted material or substance which is required to be disposed of, but does not include sewage, hazardous and radioactive wastes. The most common types are household and commercial solid wastes, that is, solid waste generated from a household or any commercial activity.

Malaysians too have little knowledge about or regard for generation, collection, transportation, recovery, treatment and disposal of solid waste. This explains why our drains and rivers are always clogged up by solid waste, and every day workers have to clear the litter trapped in floating booms installed in rivers throughout the country in order to prevent and minimise pollution and flood.

The situation is exacerbated by us generating more waste over the years. Three years ago, Malaysians generated about 19,000 tonnes of solid waste daily (TPD). Today, the figure has reached two-fold, 38,000 TPD. Out of this amount, waste separation and recycling rates only account for 24%. The remaining 76% goes to 160 landfills, of which about 15 of them are sanitary landfills. A sanitary landfill, unlike dumpsites, is a properly engineered landfill where solid waste is safely isolated from the environment with lining materials and designs to prevent leakage of leachate and contamination of groundwater and surrounding soils as well as making it possible for landfill gas to be captured and converted into a renewable energy resource. So, in developed countries, it is quite a common sight for golf courses and public parks to be built and landscaped on sanitary landfills that have been closed.

In fact, to my mind, there are three main reasons which generally explain Malaysians’ apathy and insouciance towards waste reduction and littering habits:

> lack of enforcement of the relevant laws which are not uniform throughout the states in Malaysia;

> Malaysians do not directly have to pay for treatment, transportation and disposal of solid waste; and

Currently, the Federal Parliament can legislate on matters relating to management of solid waste and public cleansing, only for states in Peninsular Malaysia and Labuan. This was done in 2007 when Solid Waste and Public Cleansing Management Act, 2007 (Act 672) was passed on the ground that sanitation is a matter within the concurrent list under the ninth schedule to the Federal Constitution. Act 672 is administered and enforced by the Director General of Solid Waste and Public Cleansing under the Ministry of Housing and Local Government (JPSPN) and the statutory body of SWCorp which was established on June 1, 2008 under the Solid Waste and Public Cleansing Management Corporation Act, 2007 (Act 673). However, Act 672 did not come into force until September 1, 2011 and it is only in operation in Perlis, Kedah, Pahang, Negri Sembilan, Malacca, Johor, Kuala Lumpur and Putrajaya.

Essentially, Act 672 confers executive authority on the federal government over matters relating to management of solid waste and public cleansing in the Peninsular and Labuan. It also empowers the federal government to enter into any agreement with any person authorising such person to undertake, manage, operate and carry out any solid waste management services or public cleansing management services. The federal government did this with three corporations which are currently operating in those states which Act 672 has come into force, namely E-Idaman Sdn Bhd in Kedah and Perlis; Alama Flora Sdn Bhd in Pahang, Kuala Lumpur and Putrajaya and SWM Environment Sdn Bhd in Johor, Malacca and Negri Sembilan. These three concession companies are also licensed under Act 672.

It is generally observed that in those areas operated by the three concession companies, the service level of performance in managing solid waste and public cleansing is higher than those states which Act 672 is still not in force. For these states, they are still governed by the Local Government Act, 1976 (Act 171) and its regulations whereby management services of solid waste and public cleansing are undertaken by the local authorities and their contractors.

This lack of uniformity in our solid waste management laws is unhealthy. Also, SWCorp has proven to be ineffective in enforcing Act 672, especially in relation to littering and waste separation or segregation by households. It has also failed quite miserably to promote public awareness on solid waste management and public cleansing services. Often, it overlaps with JPSPN and duplicates the latter’s duties.

Of course, the only time when a Malaysian family becomes conscious of the importance of waste collection and disposal is when their household waste is not collected for several days or a heap of uncollected garbage in the neighbourhood has emitted an unbearable rotting smell or odour into their living rooms. One of the main reasons is that Malaysians are not directly paying a separate charge for collecting and disposing solid waste which they have generated. We still have the mindset that it is the responsibility of local authorities to do so by them just paying local assessment. But local assessment is not just about paying for collecting and disposing garbage.

At ISWA 2018, we really had nothing very much to shout about when delegates after delegates especially from the developed world narrated their successful stories in solid waste management.

Despite the government’s concerted efforts in promoting the 3R approach – reuse, reduce, and recycle – in order to minimise the amount of solid waste for final disposal, it remains a Herculean task to ensure that ultimately solid waste is safely and environmentally disposed so as to attain a higher quality of life for Malaysians.

Hence, we may have to look at other types of waste to energy options, including incineration, apart from relying on traditional landfill system. In the meantime, we are already facing serious threat to our environment from the use of plastics which has caused a huge increase of marine litter over the years.

The current solid waste management system which is based on linear economy practices – extracting, making use and disposing solid waste - are no longer sustainable. We must work towards a circular economy model in waste management because it is generally accepted that linear practices have caused a high percentage of waste extraction becoming waste again each year. Malaysians must dispel the notion that waste is a problem. It is not. Waste is a resource. We can monetise waste or convert waste to wealth.

It follows a holistic and coherent approach is needed in extracting the maximum value from a product’s life and then recover and regenerate it by, for example, re-using, recycling or remanufacturing it. This not only reduces environmental burden but also promotes economic growth.

At ISWA 2018, Ho warned that we are now living with the consequences of wasteful over-consumption.

“We are consuming more than the earth can replenish, and this is of great concern. It has been forecast that global demand for resources will triple by 2050. The Global Footprint Network reports that we are now in an ecological deficit and it is taking Mother Earth one and a half years to regenerate what we use in a year”, said Ho.

In this respect, the Deputy Minister believes that education is the key to changing both our mindset and behaviour in order to achieve sustainable consumption and minimise wastage. Hence, the general theme of ISWA 2018, ‘Sustainable Consumption towards Waste Minimisation’ echoed this sentiment.

I could not agree more with him. In this respect, we have so much to learn from the Japanese how a Japanese handles waste from his cradle to his grave. Japanese are now known at global events to ensure that no litter is left behind by their countrymen. They have also shown to the world why and how their public toilets can be kept so clean. To my mind, it has to be and can only be by way of education.

Hence, our government and all industry stakeholders must immediately get our act together before we are consumed by the amount of waste which we generate but incapable of re-using, reducing, recycling and finally disposing it environmentally and safely.

Roger Tan is a founder and executive committee member of Waste Management Association of Malaysia. 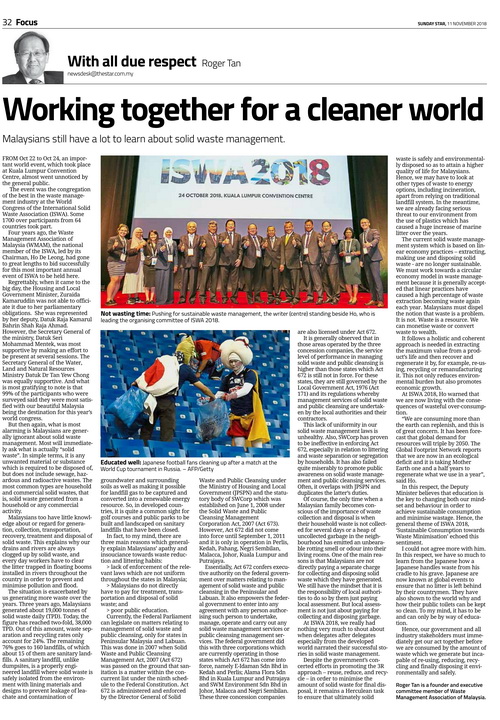