Unconscionable for banks to seek refuge behind exclusion clauses

In April 2008, a British couple living in the United Kingdom obtained a loan facility of RM715,487 to finance the purchase of their property in Malaysia. It was a term of the loan facility that the bank would make progressive payments to the developer against certificates of completion issued by the architect at each progress billing.

In March 2014, the developer sent a notice for a progressive payment to the bank, supported by an architect’s certificate.

The bank’s disbursement department then sent several internal emails to its branch to conduct site visit inspection on the property.

The branch did not do anything, and meanwhile, the due date for payment had also expired on March 25, 2014.

Neither did the bank notify the developer nor the couple that a site visit inspection was an additional condition precedent to drawdown.

The bank also did not request for any extension of time to make the payment pending the completion of the site visit.

On April 10, 2015, the developer terminated the sale and purchase agreement (SPA), after about one year from the issuance of the invoice.

The couple then sued the bank for breach of agreement and/or negligence.


The couple sought (i) RM273,996.24 being the total amount of loan payments that they had paid to the bank under the loan facility; (ii)RM747,481.42 being the couple’s total losses suffered due to the termination of the SPA; and (iii) the sum of RM10,975.30 being all other miscellaneous costs and expenses they had incurred due to bank’s breach and general, aggravated and/or exemplary damages.

In defence, the bank relied on clause 12 of the loan agreement which reads as follows:

“Notwithstanding anything to the contrary, in no event will the measure of damages payable by the bank to the borrower for any loss or damage incurred by the borrower include, nor will the bank be liable for, any amounts for loss of income or profit or savings, or any indirect, incidental consequential exemplary punitive or special damages of the borrower, even if the bank had been advised of the possibility of such loss or damages in advance, and all such loss and damages are expressly disclaimed.”

The bank argued that the couple’s claim was unsustainable as the clause had excluded the bank’s liability on the ground that the fundamental principle of freedom of contract requires parties to be bound by the terms of the contract and courts must give effect to the clear and plain meaning of the words in clause 12.

The High Court agreed, in that clause 12 had absolved the bank from any liability or claim in contract and in the tort of negligence.

The High Court did not make any finding of fact whether the bank was in breach of the loan agreement or negligent when the invoice was not paid. On appeal, the Court of Appeal allowed the couple’s appeal against the decision of the High Court.

The bank then appealed to the Federal Court.

On Dec 17, 2018, the Federal Court dismissed the bank’s appeal and affirmed the decision of the Court of Appeal by striking down clause 12 for having contravened sections 24(e) and 29 of the Contracts Act, 1950 (Act 136).

Section 24(e) of Act 136 states that any consideration or object of an agreement which is against public policy will render the agreement unlawful and void.

On the other hand, section 29 provides as follows: “Every agreement, by which any party thereto is restricted absolutely from enforcing his rights under or in respect of any contract, by the usual legal proceedings in the ordinary tribunals, or which limits the time within which he may thus enforce his rights, is void to that extent.”

These are indeed landmark decisions of the Court of Appeal and the Federal Court.

It is, therefore, important to summarise briefly the findings of the Federal Court in CIMB Bank Bhd v Anthony Lawrence Bourke & Anor, 2018:

> Given its natural and ordinary meaning, clause 12 has only one meaning, that is, it must be given effect to and enforced, however unreasonable the court may think it is. If that is the case of allowing clause 12, then it would be an exercise in futility for the couple to file any suit against the bank as they are precluded from claiming all forms of damages for breach of contract or negligence.

> Clause 12 is, therefore, an absolute restriction and section 29 of Act 136 prohibits such restriction.

However, mere limitations and/or some restrictions added into an exclusion clause are insufficient to invoke section 29. Section 29 speaks of only absolute restriction.

> Freedom of contract must surely still imply some choice or room for bargaining, even in standard form loan agreements. In this case, the couple have unequal bargaining powers with the bank.

This is against public policy. It is therefore patently unfair and unjust to the couple had clause 12 been allowed to deny their claim/rights against the bank.

In the words of Justice Balia Yusof Wahi who delivered the judgment of the Federal Court: “It is unconscionable on the part of the bank to seek refuge behind the clause and an abuse of the freedom of contract.”

It follows that contracts which seek to oust the jurisdiction of the courts are invalid.

Hence, in the absence of an all-encompassing legislation that deals with unfair contract terms such as in Singapore and the United Kingdom, it is time for the government to introduce such a legislation or extend the protection currently given to consumers under the Consumer Protection Act, 1999 (Act 599) to all types of contracts including financial dealings and transactions, involving, particularly, purchasers and borrowers of housing development.

The reason being notwithstanding section 24B of Act 599, it has been argued that Part IIIA of Act 599 applies only to consumer contracts.

Section 24D of Part IIIA of Act 599 states that a contract or a term of a contract is substantively unfair if the contract or the term of the contract (a) is in itself harsh; (b) is oppressive; (c) is unconscionable; (d) excludes or restricts liability for negligence; or (e) excludes or restricts liability for breach of express or implied terms of the contract without adequate justification. Section 24A(c) of Act 599 defines an “unfair term” as a term in a consumer contract which, having regard to all the circumstances, causes a significant imbalance in the rights and obligations of the parties arising under the contract to the detriment of the consumer.

All in all, the Malaysian Bar Council welcomes this decision which protects borrowers who are often at the mercy of this unequal bargaining with the powerful financiers.

Datuk Roger Tan is the chairman of the Conveyancing Practice Committee, Bar Council, Malaysia. This column is brought to you by the Malaysian Bar Council for your information only. It does not constitute legal advice. 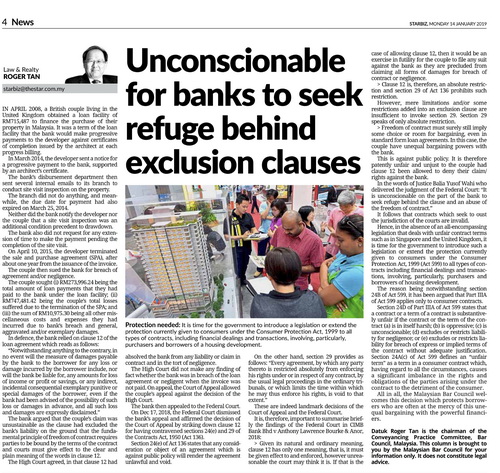