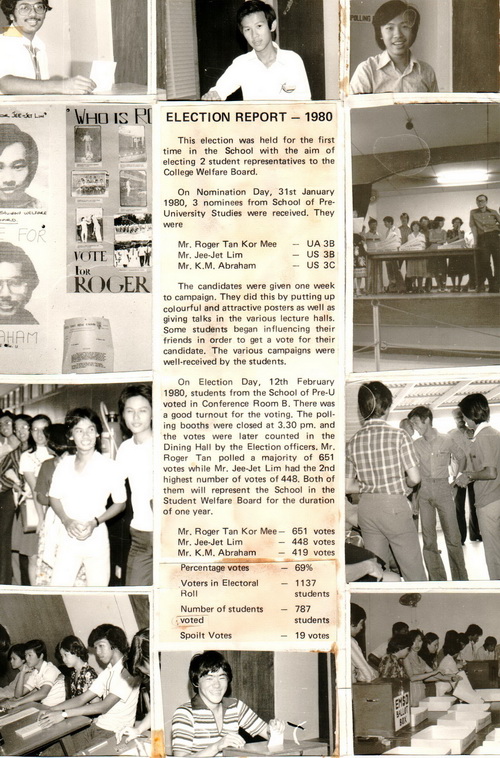 Of course, without TARC, I would not have been able to do any A Level (or Higher School Certificate, HSC, as it was known then) studies at all, as I hailed from the little town of Yong Peng, Johor, and had to survive on an all-in monthly pocket money allowance of M$200. This included travelling daily from my brother’s house near Batu Caves to the Jalan Cheras Secondary School on a journey that usually took about an hour and half, including a 2km walk from the house to the main road to catch a stage bus. That explains why I was then only one third of my current size!


Being so thin and small-built, I was soon a common target of extortionists operating in the crowded Puduraya Bus Station or along Jalan Chow Kit or Jalan Ipoh where I had to switch from a stage bus to a mini bus. But the gangsters stopped harassing me after I started carrying a file with a prominent pamphlet on its cover with the Chinese words for either “Jesus Loves You” or “Jesus Saves You”. They probably stayed away to avoid being preached at!

Students studying outside the TARC main campus generally felt a little neglected as students on the main campus got to enjoy various facilities; we especially missed using the main library there. Hence, a group of us got together to offer a candidate to stand for student elections in January 1980. I was asked to stand and I knew it was no easy feat, as I would be going up against two candidates from the main campus. Nobody there knew who I was. So in order to help the city folk remember the name of this kampung boy, I campaigned under the name of “Roger Tan” instead of my Chinese name.

The initial response to my campaign was hostility, especially from students on the main campus. I had to deliver election speeches moving from one lecture hall to another. Having been a head prefect at my Yong Peng secondary school, my experience in public speaking came handy.

Even more fortunate than that was the fact that I was a part of the English and Chinese literature lecture group. Most of my lecture mates were girls – not just ordinary looking girls but pretty ones! Freshie Queen Janet Tai, Disco Queen Yh Teh and Miss Malaysia candidate Rosalind Chan all came from this group, and not forgetting Wong Sweet Lo! When they began accompanying me on my campaign rounds, the hostility disappeared as the boys quickly turned their attention on to my pretty campaigners!

With their command of the English and Chinese languages, my lecture mates and my supportive housemates Andy Chee, Tey Kok Joo, Andy Oon Ean Tan, and Poh Leng Fong came up with all sorts of eye/ear-catching slogans! I started off with a huge 10-point manifesto placard hung up at the college entrance. I remember one point was that I pledged to act fearlessly in protecting the interests of the students against any interference or intimidation.

At this time at the national level, Lee San Choon and Michael Chen were fighting for the MCA presidency but with all the election materials for our student elections being hung around on the campus, the feeling on campus was akin to the national MCA election fever!

Soon enough, I was summoned to the vice-principal’s office. Mr Lee Ker Foon wanted to know why was I so political and what did I mean by intimidation because the college management had never intimidated any student! (Note: Mr Lee, who was then also head of SPUS, and I later became good friends. Then deputy SPUS head, Mr Tsen Wei Kong, was also a mentor. I learnt so much from him especially in the manner in which we come to grips with problems, and especially in changing my rigid mindset to a moderate one. I am eternally grateful to him.)

But all this work was not without personal cost. I remember half way through 1980, I was offered a place at a Teacher’s Training College but because I had promised to serve as a student representative, I did what was unthinkable in those days and rejected the government’s offer, much to my mum’s displeasure. Alas, by devoting my student life to looking after the welfare of fellow students, I neglected my studies and had to repeat my A Levels. But looking back, this is not something that I am ashamed of because I can now say proudly and with a clear conscience that I fulfilled my election manifesto.

If need be, I would do it all again to protect the welfare of the students of my alma mater against any interference or intimidation and without fear or favour in the true spirit of a Tarcian!

This letter was originally a Facebook post by Datuk Roger Tan, and is republished here with his permission. Tan is a senior lawyer and chairman of the Conveyancing Practice Committee of the Bar Council 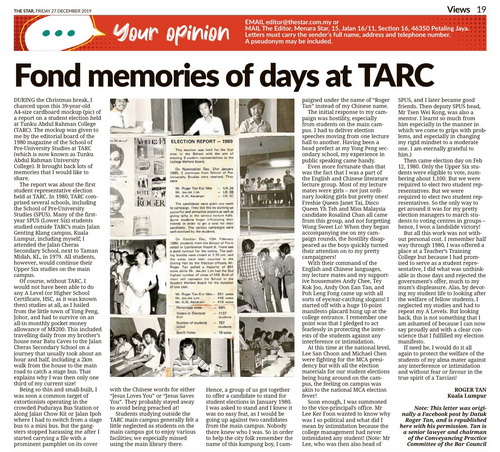