At the appeal hearing, the learned counsel for the purchasers, Datuk Andy Wong Kok Leong was reported to have submitted as follows: “Regulation 11(3) gives power to the controller to grant this extension of time. So we are saying that the controller cannot be given this power because it should be exercisable by the minister.” (“Apex court reserves judgment in house buyers vs developer case”, The Star, May 14, 2019)

The Chief Justice agreed, adding that when Parliament conferred the power and discretion on the minister to make regulations under section 24(2)(e) of Act 118 to regulate and prohibit the terms and conditions of the contract of sale, Parliament did not intend this power or discretion to be exercised by any authority other than by the minister himself.

Justice Tengku Maimun also gave the following grounds in arriving at the decision:

> As Act 118 is a social legislation to protect the house buyers, the interests of the purchasers shall be the paramount consideration against the developer. There is nothing in Act 118 to show that the minister’s duty to safeguard the interests of the purchasers may be delegated to other authority as this will “militate the intention of Parliament”.

> There is no merit in the developer’s argument that the purchasers would suffer greater hardship if the project is not completed because if the developer fails to obtain an EOT, this would not mean that the developer has failed to complete or has abandoned the project as an EOT only determines the payment of LAD.

It is now apposite to make a clarification as regards the statement by the learned Chief Justice in paragraph 23 of the judgment that the Bar Council supported the position taken by the developer. With all due respect, the Bar Council did not. If at all, counsel for the Bar Council was only reiterating the principles laid down in the case of Carltona, Ltd v Commissioners of Works and Others, 1943 which also formed the submission of the senior federal counsel who appeared for the minister and controller that the minister has the implied power to delegate and the minister’s functions can be performed either personally or on his behalf by his officers.

To quote Lord Greene, M.R. in the Carltona case: “It cannot be supposed that this regulation meant that, in each case, the minister in person should direct his mind to the matter. The duties imposed upon ministers and the powers given to ministers are normally exercised under the authority of the ministers by responsible officials of the department. Public business could not be carried on if that were not the case. Constitutionally, the decision of such an official is, of course, the decision of the minister.”

Even though this submission did not persuade the court, counsel for Bar Council did agree with the purchasers’ argument that the minister’s decision to allow the appeal from the developer BHL Construction Sdn Bhd was invalid because the letter signed by his officer did not comply with Section 17 of the Delegation Of Powers Act 1956.

A fortiori, the Bar Council had also emphasised that modifications to contracts of sale did not just involve EOTs. They could involve multi-farious modifications as the standard prescribed contracts of sale are incapable of catering for every eventually. In fact, some modifications such as by extending the time for progressive payments or amending the amounts of progressive payments by home buyers, for example, in government projects for affordable housing, work in the interest of home buyers. In other words, whilst one group of the purchasers would benefit when EOTs are invalidated, another group of purchasers may suffer if modifications which are to their advantage are now extinguished as a result of this decision.

The reason being, in my humble opinion, this decision of the apex court will have retrospective effect on all other modifications made before this. After all, if regulation 11(3) has been declared void, it has to be void ab initio (from the beginning).

In Public Prosecutor v Mohd Radzi bin Abu Bakar, 2005, the Federal Court held that it is a fundamental principle of adjudicative jurisprudence that all judgments of a court are retrospective in effect. This principle not only applies to constitutionality of statutes but also to decisions in other areas of law unless a specific direction of prospectivity is expressed in the decision. There is none in Justice Tengku Maimun’s judgment unlike in other cases such as Semenyih Jaya Sdn Bhd v Pentadbir Tanah Daerah Hulu Langat and Anor, 2017.

It is my considered view that if henceforth no modification is allowed due to special circumstances, hardship or necessity, the housing industry may just grind to a standstill. But this problem is not altogether insurmountable. Whilst it may take time for Parliament to amend section 24 to empower the minister to delegate his powers to the controller, the 1989 Regulations can, however, be amended by the minister any time.

In this respect, the minister can always insert a new regulation 11(3A) to allow parties from now on to apply to him for a waiver or modification to the provisions of the contract of sale. At the same time, the minister has to repeal the appeal provision in regulation 12. Administratively, the applications will still be processed by ministry officials but if any letter conveying the minister’s decision is not signed by him personally but signed by his officer on his behalf, then strict adherence must be had to the procedures set out in section 17 Delegation Of Powers Act, 1956 such as authorising such officer by way of a certificate.

Having said that, if this approach is taken by the ministry, then it is indeed a matter of regret that the apex court had declined to deal with the issue of affording the purchasers a right to be heard prior to the minister approving any waiver or modification notwithstanding that Act 118 does not expressly provide for such a requirement. Otherwise, it will greatly strengthen the rights of the purchasers.

This is of particular concern because according to the data collected by the House Buyers Association, 536 EOTs were actually granted since 2014. It follows that if the right to be heard is now not expressly provided in Act 118 or the 1989 Regulations, the powers of the minister can be easily abused and are also susceptible to corrupt practice. The purchasers will ultimately be at the mercy of the developers, especially those who have strong political and personal links to the powers that be.

I now recall when I was helping the housing ministry pro bono to revamp Act 118 in 2002 and 2007, the then housing minister actually requested for regulation 12 to be removed so that he would not be harassed by the developers. In those days, granting an EOT was almost unheard of.

In any event, the apex court has now made it abundantly clear to the government that it is duty bound under Act 118 to safeguard the interests of home buyers whose interests must always prevail over that of the developers. Otherwise, the court will remain steadfastly the purchasers’ rampart against such encroachment.

Datuk Roger Tan is the chairman of the Conveyancing Practice Committee of the Bar Council. His views herein do not constitute legal advice, and are entirely his own. 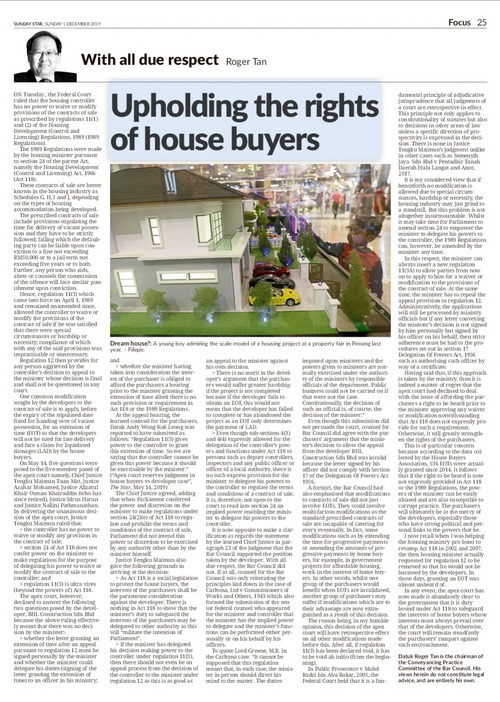